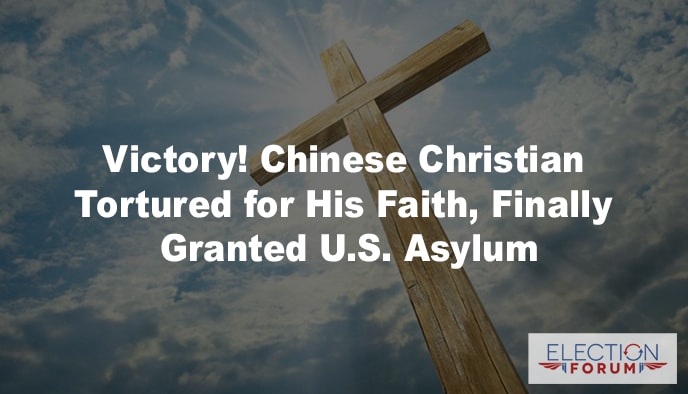 Ting Xue fled China after he was persecuted for his faith. He was:

Xue had to practice his Christian faith in hiding.

You would think he would easily be granted asylum in the U.S. once he fled China.

But such was not the case. The U.S. judiciary system wanted to send him right back into the lion’s den.

But God is good.

The Trump-era Department of Justice agreed to grant him asylum, after the U.S. Court of Appeals for the Tenth Circuit ruled that religious persecution does not necessarily exist where an immigrant had to practice his faith in hiding.

After the Pacific Justice Institute filed a “friend of the court” brief asking the Supreme Court to review the ruling, the DOJ intervened.

The DOJ ultimately agreed to re-open and remand the case to the Board of Immigration Appeals (BIA), the highest administrative body devoted to interpreting and applying U.S. immigration laws. It was the BIA that granted asylum to Xue.

It’s a victory for the faithful.

“Since America was founded, people facing religious persecution in other countries have fled here so they could freely practice their faiths,” said Brad Dacus, president and founder of PJI.

“The whole point of religious freedom is that you’re free to practice as publicly or privately as you see fit—you don’t have to stay in the closet that so many countries have succeeded in pushing Christians into.”

What do you think? Write me at Craig@electionforum.org