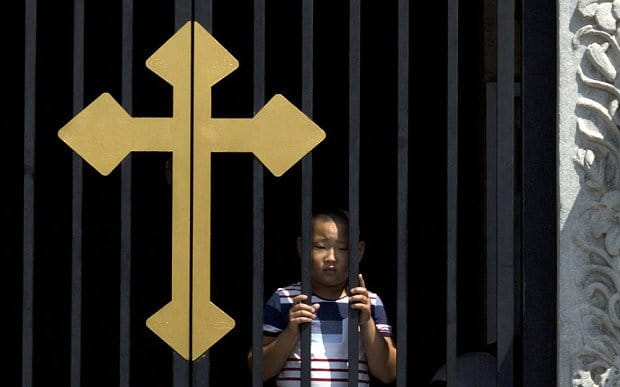 Communist persecution of Christians – jailing, torture, killing – was at its height in China during the 1960’s horrific “Cultural Revolution”.

But what’s happening today may be worse.

The Chinese government, under the guidance of President Xi Jinping, has escalated the persecution of people of faith with his ‘sinicization’ campaign. “Sinicization” is to recreate religion to align with the Communist Party of China’s ideology.

The major push against Christians now is what is called “sinicization’.

Sinicization gives the CCP a chance to “re-imagine” Christianity with the government or “state” at its center.

Its goal is to create conformity and loyalty to the state – collectivism at the expense of the individual.

That’s why portraits of Jesus are being replaced by MAO and XI in state-sanctioned churches.

That’s why churches were provided with “a model sermon” based on XI’s centenary speech marking the communist party’s 100 year anniversary.

That’s why the pastors were instructed to hail, “Long live the great, glorious and correct Chinese Communist Party” in their services.

The CCP raided and closed down many house churches, even including state-run churches.

The distortion of Biblical truth is taught at schools. For example, they twisted and distorted Biblical Stories like this:

John 8 is about how Jesus forgave a woman who had committed adultery.

But the altered version, says Jesus stoned the woman, saying, “I too am a sinner. But if the law could only be executed by men without blemish, the law would be dead.”

This persecution was going on under President Trump, but not nearly as great. The Secretary of State Mike Pompeo and Ambassador-at-Large for religious freedom Sam Brownback put huge, official pressure on China to free pastors and stop the persecution.

But under Biden, the persecution has escalated and gone unchecked or restricted. The President and Secretary of State Tony Blinken are silent about religious freedom, stopping religious persecution, and protecting human rights.

America is abandoning Christians in China.

Please vote only for candidates who want to protect the persecuted.

3 Comments on “China 2020: Worst Persecution of Christians Since the Cultural Revolution in the 1960s”