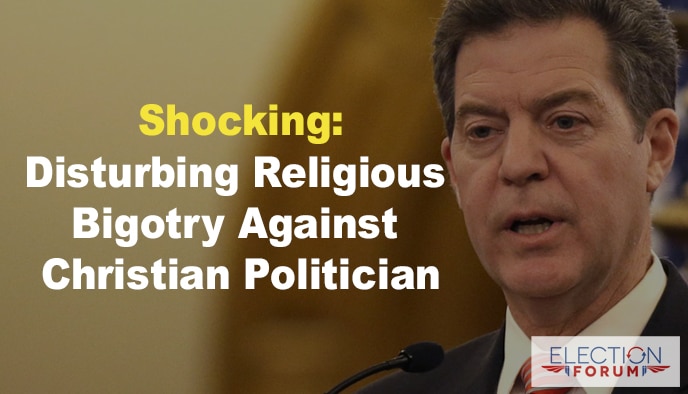 It is deeply ironic that a Senate confirmation hearing for Ambassador at Large for International Religious Freedom should attack … religious freedom.

It is also very disturbing.

When he finally came up for a confirmation hearing Oct. 4, he was grilled by members of the Senate Foreign Relations Committee.

Sen. Tim Kane, a Democrat from Virginia, said he was concerned with Brownback rolling back extra privileges for state employees based on sexual orientation.

Brownback replied he didn’t think it was the role of the executive branch to provide such privileges when the legislature did not pass a law to do so.

It was a “non-issue” question that was merely used to skewer Brownback’s Christianity.

Kane also asked him if he thinks there is a circumstance where religious freedom can justify criminalizing people because of their LGBT status.

Brownback replied he didn’t know what that justification would be.

The assault on his “religion” continued with Sen. Jeanne Shaheen, a Democrat from New Hampshire. She asked whether it is okay to deny women access to abortion in the name of religious freedom.

Brownback replied the ambassador should stick with religious freedom without getting in the middle of the abortion debate, or other debates, that cannot even gain consensus in the United States.

Brownback said he would focus on religious liberty, even though senators tried to take him off track.

Senate members didn’t ask Brownback how he would promote religious freedom across the globe. They weren’t interested in what he would do to bring religious issues to the attention of the President.

They wanted to know how he stood on abortion and homosexual rights.

So, why is this an important position?

As part of the State Department, Brownback would be promoting religious freedom as a foreign policy objective.

Brownback wrote on Twitter: “Religious freedom is the first freedom. The choice of what you do with your own soul.”

Brownback is a great choice for bringing to light and fighting persecution against Christians and other religious minorities in India, Russia Turkey, areas of the Middle East, the Philippines, Burma, China, North Korea, Saudi Arabia, and other countries.

Christians are harassed in more countries than any other religious group.

His position transcends the debate over abortion and LGBT rights.

Here are 12 things you need to know about Brownback and the ambassadorship:

I believe Brownback is an awesome choice for a job in a world where religious freedom is deteriorating.

As the 2017 report from the U.S. Commission on International Religious Freedom (USCIRF) noted: “The blatant assaults have become so frightening – attempted genocide, the slaughter of innocents, and wholesale destruction of places of worship – that less egregious abuses go unnoticed or at least unappreciated.”

Brownback will give a voice to the persecuted.

Pray for his quick confirmation and powerful impact in the coming years.