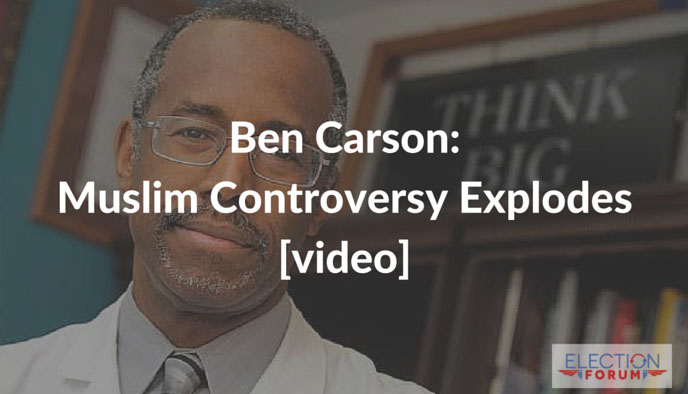 Ben Carson received a “gotcha” question from the liberal media.

The question: Would Ben support a Muslim as President?

His answer, “No, because Sharia law would then be the law of the land – not the Constitution.”

In every country where there is Sharia law, there is oppression and violation of our constitutional protections – protections of life and liberty.

We see oppression of women… we see killings of homosexuals… we see violations of property rights… we see no free expression or freedom of the press… and no religious liberty.

But the media jumped all over this.

So Ben Carson’s been on the air, trying to explain it.

And here’s a great discussion about the conflict between the Constitution and Islam’s Sharia law: watch here.

Even other Republican candidates have portrayed Carson’s statement as un-American, as imposing “a religious test” on candidates.

“I think [Ben Carson not supporting a Muslim president] is wrong. It says in our Constitution that religion cannot be a test for office. It is also true that this country was founded on the principle that we judge each individual and that anyone of any faith is welcome here. I actually believe that people of faith make better leaders.”

“I would be fine with [a Muslim President].”

The points Ms. Fiorina made are true but misleading. She’s right – the Constitution prohibits the government from imposing a religious test as a qualification for office. But that is not what Dr. Carson proposed.

Dr. Carson said he would not personally support a Muslim for President. And he offered good reasons for doing so – the fundamental principles of Islamic faith as practiced today run counter to foundational principles of our Constitution.

America is a democracy – we the people choose our leaders. We choose who to support and who not to support. What Dr. Carson did is what every American should do when he or she makes judgments about Presidential candidates: evaluate the individual’s character, philosophies, and principles. An individual who is a sincere Muslim believer will be unwilling to uphold our Constitution because Islam requires that Sharia law – which is at odds with the Constitution – be imposed on society.

If Dr. Carson’s comments were meant to propose a governmental test… it would be a constitutional one, not a religious one. And we already have that – it’s called the Oath of Office. Any President who does not uphold the Constitution when in office has violated that oath and should be impeached.