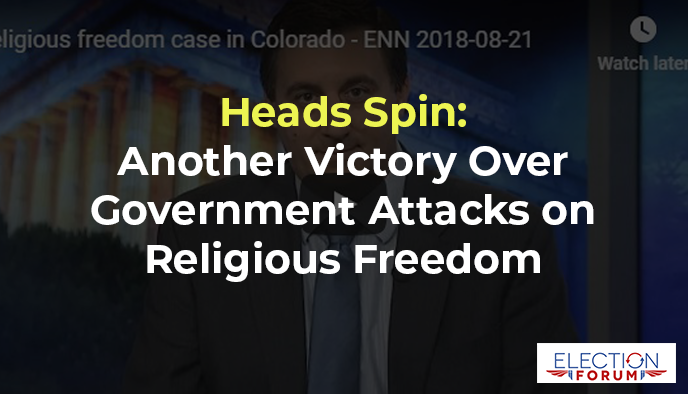 Because he fought the Colorado Civil Rights Commission – which charged him with violating the state’s anti-discrimination law for declining to design a custom wedding cake promoting and celebrating homosexual marriage.

The case cost him 6 years and 40% of his business…

But he finally won his case last year in the U.S. Supreme Court.

We’ve written about Colorado’s attacks on his religious liberty here and here.

Less than a month after being vindicated by the U.S. Supreme Court, the Colorado Civil Rights Commission attacked Jack Phillips again – this time over declining to design a cake celebrating a man’s decision to transition to a woman.

The request for this cake came from a Colorado lawyer who had previously requested a cake celebrating Satan’s “birthday” with an image on the cake of Satan smoking marijuana.

We wrote about that attack here.

In response to this second attempt to crush Phillip’s small family business, he turned the tables and filed a lawsuit against the Colorado Civil Rights Commission for violating his First Amendment religious freedom rights.

After a federal judge refused Colorado’s request to dismiss Phillips’ lawsuit, Colorado’s attorney general announced last week that the state will dismiss its case against Phillips in exchange for him dropping his lawsuit against the state.

“Jack’s victory is great news for everyone,” remarked the Alliance Defending Freedom attorney representing Phillips. “The state’s demonstrated and ongoing hostility toward Jack because of his beliefs is undeniable.”

Phillips said he has in the past … “and always will serve everyone who comes into my shop.”

But he won’t create custom cakes that express messages or events that contradict his faith. That includes cakes celebrating Halloween, glorifying divorce or bashing the United States.

What do you think? Do you agree with Jack Phillips? Write me at craig@electionforum.org

One Comment on “Heads Spin: Another Victory Over Government Attacks on Religious Freedom [Video]”