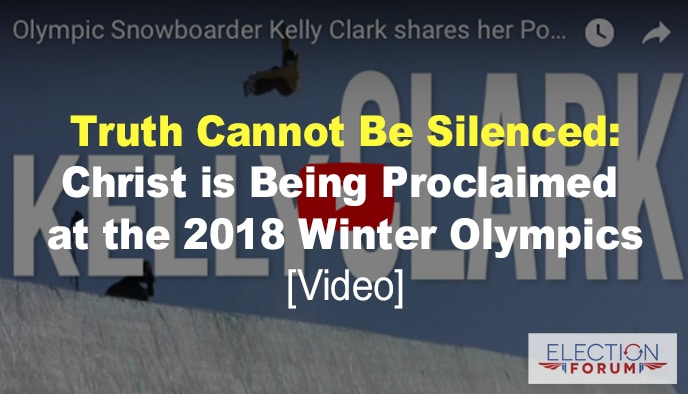 Kelly Clark won a Winter Olympics gold medal in the Women’s Snowboard Halfpipe event in 2002 – at the age of 18.

She was not a Christian at the time…

She won bronze medals in the same event in the Winter Olympics of 2010 and 2014 … and has won numerous other medals in Winter X Games and other competitions during her 18-year professional career.

In this year’s Winter Olympics in PyeongChang, South Korea, Clark – now 34 years old and competing in her 5th Olympics – finished 4th while competing with women half her age.

She rides with a sticker on her snowboard that says, “Jesus, I cannot hide my love.”

Here are 4 other Christian athletes on Team USA who are proclaiming Christ at the PyeongChang Winter Olympics:

She met her husband, Nic Taylor – an alternate on the men’s bobsled team – at a Bible study near the U.S. Olympic Training Center.

In 2016, Meyers-Taylor said, “I know that God is working through me within this sport. I know He’s put me here for a purpose and it’s not just to win medals.”

An NBC report called Wise’s Christian faith an “alternate lifestyle” compared to that of other Olympic competitors.

“My faith plays a pretty significant role in who I am as a person,” Wise says. “But also I think my faith makes me a better competitor, and better at what I do…I trust that God knows what He is doing with my life in the grand scheme of things.”

This year they will be competing with champion team Canada for the gold.

“My mission is more than winning another medal or championship,” she said in a magazine interview. “It’s about sharing Christ and leading others to Him. I know my worth is not found in what I can achieve in this game. Instead, my identity and value is found only in Christ, my Redeemer and Lord.”

The bronze medalist in 2014 was stripped of her medal for doping, elevating Uhlaender to the bronze … but the ruling was later overturned, putting Uhlaender back in 4th place.

Despite her roller coaster ride of ups and downs, Uhlaender said she relies on her faith: “Quitting is never an option, so why would I quit on God? He guides me and gives me the strength to keep going.”

Pray that these athletes will all have opportunities to share their faith during the 2018 Winter Olympics … and that they will boldly take advantage of them.

2 Comments on “Truth Cannot Be Silenced: Christ is Being Proclaimed at the 2018 Winter Olympics [Video]”