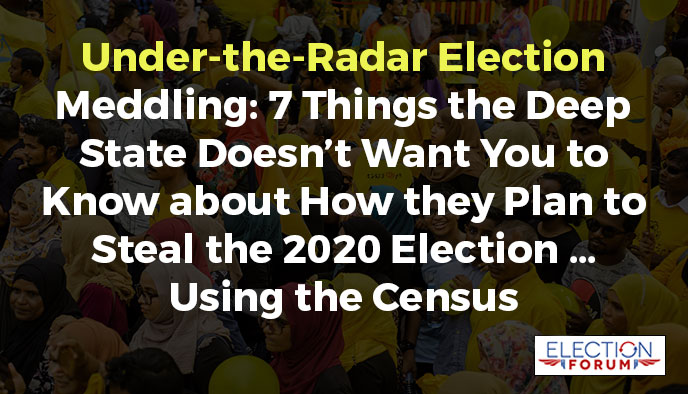 Deep State bureaucrats are secretly working behind the scenes to change future election results – for the next 10 years!

Socialist Democrat politicians and organizations are joining together, along with help and big money from state and national Deep State bureaucrats.

Here are 7 little-known things the Deep State bureaucracies and socialist politicians don’t want you to know:

Democrat state governors are aggressively using their government employees to organize, finance, and mobilize an army of ideologically-driven census takers.

For example, in California, estimates range between 4 and 10 million non-citizens who won’t be counted in the census if “Are you a U.S. citizen?” is included.

This would translate to a loss of $40 to $90 million of federal tax dollars to the state.

And it means California – instead of gaining several new congressional seats – would probably lose 1 or 2 … maybe even as many as 5 seats.

They are on the warpath.

They often call this “under-counted.”

This will be the first time an online census is allowed – opening it up to massive fraud by community groups.

The community organizers will enlist workers called “numerators” – also called “enumerators.” They must be U.S. citizens. But unlike in the past when census takers were simply hired to do their job, they now will be hired to turn the census into a Democrat/ Socialist machine.

The socialist Democrats in California have officially allocated $10 million in their state budget to count everyone. They are recruiting hundreds of community organizations. They are breaking out Latino, Pacific Asian, Asian, Middle Eastern and other ethnic groups. And they are picking micro groups like fishermen and the homeless.

In addition, pro-socialist foundations are providing workers, marketing and money to help this new “cause.”

Their goal is to raise $100 million to “assist” in the census to maximize the census count.

These government employees are unaccountable. They are not “public servants,” but appointed by liberal politicians because of their ideology. And the taxpayers are paying the bill.

Every 10 years there’s a nationwide census. The #1 objective of the socialist Democrat politicians, organizations and Deep State bureaucrats is to control and manipulate the upcoming census … so they will win the election in 2020 … and every election for the next 10 years!

Organizing for Action – former President Obama’s massive political activist group – has made this their #1 objective for this year.

It’s already happening all across the country:

If they can succeed in manipulating the census and using it to register non-citizens to vote, half the battle is won. The second half…

The second part of their plan is to control and subvert the redistricting process to create:

Despite what they say, their goal is to subvert fair representation.

This rigs elections to give a distinct and unfair advantage to the party that has created the gerrymandered districts.

This is the #1 effort by groups and politicians promoting an anti-freedom, anti-capitalist, anti-religion campaign:

This will set the boundaries for political election races for 10 years. That’s why such energy, money, and organization is going into it.

Even now, commissions are beginning to be formed … and candidates selected … and donations raised to support candidates.

NOTE: Gerrymandering can change election results in races for state legislature seats and House of Representatives seats. It does not affect U.S. Senate races, as those are state-wide elections.

A fair census is a census that counts the population of citizens.

If non-citizens are counted in the same category as citizens, two things happen:

To accomplish the goal of counting non-citizens, the Deep State bureaucracy is working overtime to undermine President Trump’s efforts to only count U.S. citizens.

The Deep State census employees at the U.S. Census bureau and at the state level have 3 purposes:

To this end, several state attorneys general have sued U.S. Secretary of Commerce Wilbur Ross for wanting to separate citizens from non-citizens in the census…

Millions of taxpayer dollars are being spent to block a fair census.

The issue is one question: Are you a citizen of the U.S.?

A federal judge in New York has ruled that the question cannot be included in the 2020 census.

Here’s something to consider: a federal district court judge has jurisdiction over his or her district ONLY. But these district court judges have been overstepping their authority and undermining the Constitution by overruling national executive actions … on immigration policy, on health care policy and more.

Only Congress – through legislation – or the Supreme Court – which has the authority to rule on constitutionality at the national level – has the power to overturn an executive order or executive-branch policy.

Why aren’t the Republicans challenging the abuse of power of federal district court judges who have no authority to make nationwide policy decisions?

Why don’t ordinary American citizens want to know the real number of illegal immigrants living in the U.S.?

Where are the Republicans?

They will be wiped out for 10 years if they don’t act now.

If you’re concerned about this, please donate to our Turn America Around campaign. Help us expose this. Help us ensure a fair census and get the redistricting to be done fairly.

If you’re called, please donate $10 or more. We desperately need it.

Maybe you’re blessed enough that you’ll feel called even to give $50 or $100.

Fighting the Deep State isn’t easy. But it must be done.

CLICK HERE to make a donation online to Help Turn America Around.

One Comment on “Under-the-Radar Election Meddling: 7 Things the Deep State Doesn’t Want You to Know about How they Plan to Steal the 2020 Election … Using the Census”