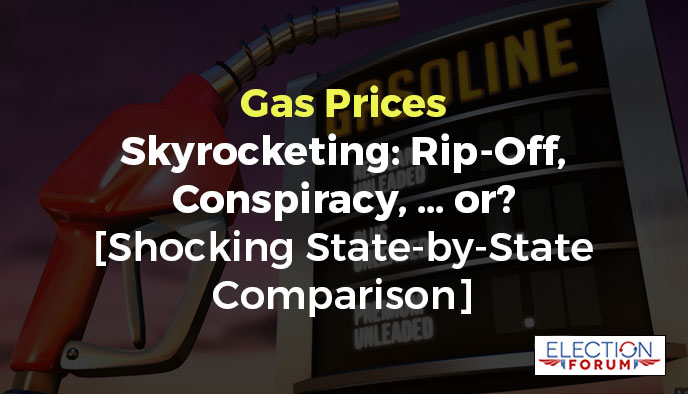 The biased media and politicians are making false claims about gasoline prices:

The poor and middle class suffer the most.

Even those who ride public transportation face higher fares due to increased fuel costs.

But fuel price increases also impact every business and every consumer … as the increasing costs of transportation – which add to the cost of production – are passed on to consumers in the form of higher prices for everything you buy.

The dirty little secret is how much you pay to the government for each gallon of gas you buy.

But that’s just the beginning…

According to July 2019 data from the American Petroleum Institute, these are the 10 states with the highest total taxes on gasoline (including the 18.4-cent federal tax):

The national average total price per gallon of regular gasoline is $2.749.

Compare that with California’s average price of $3.760.

Prices fluctuate weekly. You can check the latest information on state and national average prices and trends by clicking here.

California has the highest gasoline prices in the nation for several reasons:

On January 1, 2020, total state gasoline taxes could go up by as much as an additional 72 cents per gallon thanks to the 2013 California law on cap and trade … and a new additional adjustment for inflation.

Every April, California also sees an increase in gasoline prices due to:

Vehicle registration fees is another source of revenue that varies widely by state and by vehicle type, weight and value.

Among all the states, I feel sorry for those living in California…

The number of fees included when registering a car in California is mind-boggling.

Here are just a few of them:

Then there are County/District Fees that vary based on where you live:

These are all hidden fees collected by the California DMV that don’t show up on a registration renewal notice.

No wonder California total vehicle registration costs are the highest in the nation!

Here is where the roughly $16 billion in California gas taxes and vehicle fees supposedly goes:

Some of these categories are too broad to maintain accountability…

For example, there’s no breakdown showing how much of the 59% — representing $9.5 billion – goes toward highway and bridge repair versus public transit – including the ill-conceived and incredibly wasteful high-speed bullet train project between Bakersfield and Merced.