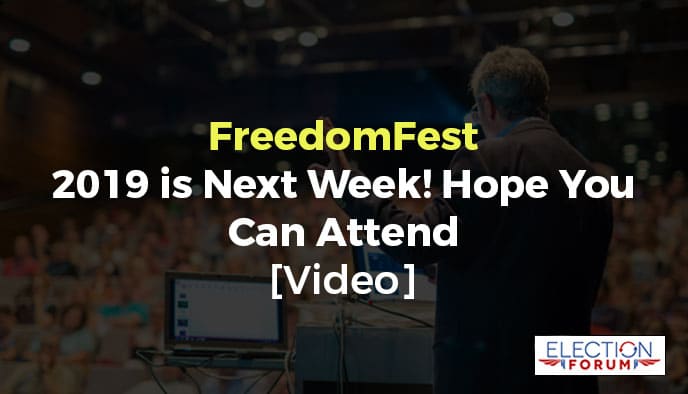 If you love liberty, the free market and intellectual stimulation, you won’t want to miss FreedomFest 2019 at the Paris Resort in Las Vegas July 17-20.

It’s going to be the best FreedomFest ever – an event of a lifetime.

In addition, an America’s Got Talent finalist will be entertaining the attendees at the Saturday night banquet.

One of the 7 big-name debates will be on July 18th between Canadian businessman and Shark Tank star Kevin O’Leary and John MacKey, CEO of Whole Foods Market…

These two entrepreneurs have very different ideas about the primary goals of large corporations.

Other noted speakers you will want to hear:

I will also be giving two talks. I’ll be speaking on:

Plus, I’ll be on a powerful panel about Google abuse and bias.

It’s going to be an amazing conference.

You’ll get information you’ll never hear in mainstream media about the future of politics in America. (What’s really going to happen during Election 2020?)

And learn from the experts about how to invest, make money and protect your assets now.

You’ll be on the edge of your seat from start to finish for this fiery, no-holds-barred event on the culture, politics, the economy, and more.

Watch this short 2-minute video of Kevin O’Leary talking about his debate with the CEO of Whole Foods Market.

You can get full registration details here.