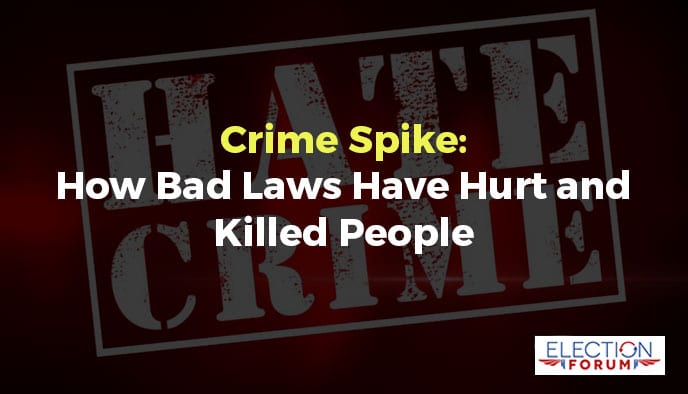 Across America, large cities controlled by socialists have seen their crime spike…

All of it is hurting the innocent and giving no hope to victims or to the criminals caught in a web of evil.

I believe in justice reform. Bad laws have locked up too many in prisons that turned people into worse criminals.

These bad laws have created terrible consequences, especially on black and Hispanic communities.

But those living in cities and certain communities with gang members are under assault.

The purpose of government is law enforcement, equal protection and justice.

The socialists with good-sounding laws corrupt justice by not understanding the principles of justice and the brokenness of human nature. They have created a living nightmare for millions.

Once upon a time, not long ago, it had the nation’s strongest public safety laws.

But a radical shift took place. In the last 20 years, California has seen a massive shift in law.

Crime is not even reported.

Criminals get no punishment.

And criminals – if they are captured – are released to continue their crimes, without serving any time punishment … and without being required to perform any restitution.

Restitution is a major key to stopping crime and creating a road to recovery for those caught in a pattern of repeat offenses.

Without restitution, there is little hope for restoration.

I have some first-hand knowledge of this…

A little over a year ago, one of my sons was shot 5 times at close range by 3 teenaged gang bangers and was left for dead in a parking lot in southern California.

Miraculously, he survived and is almost fully recovered physically … although emotional and psychological scars remain.

The entire incident was caught on security camera video, so the police knew exactly who the kids were who shot my son.

Two of the 3 teenagers spent 10 days in jail and then were released.

The police officers felt this was dangerous to the school they attended – and to the community – to let the kids go. All of them had long rap sheets.

The shooter’s defense attorney has tried to maneuver legally, but luckily it doesn’t look like he will be able to manipulate a new law passed by the socialist Democrats into getting the shooter released from prison in his early twenties … which is what he had hoped.

There have been multiple court hearings and delays by the defense.

The way these criminals have been coddled and catered to is a very sad commentary on justice in our society today.

In cities across America, people live in constant fear. They should not.

Children aren’t safe. Many are being shot … and some killed.

Criminals are not being held accountable…

More and more often, law-abiding citizens with guns – defending themselves and others – are the ones who are stopping crime and saving lives.

It’s time for a change.