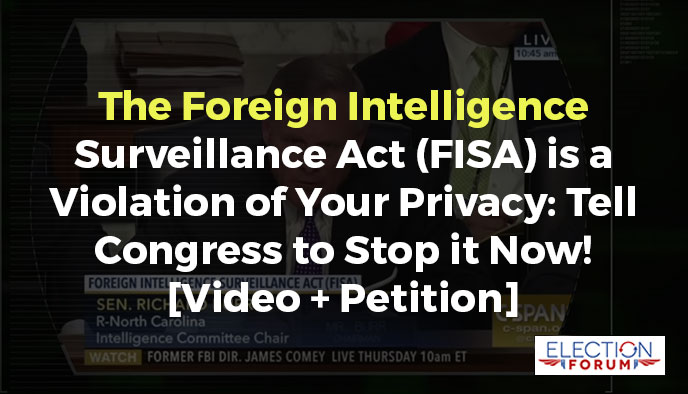 Its excuse is that it’s stopping terrorism inside the U.S.

It’s all done under the shady and secretive FISA Court, which has overreached its bounds of allowing surveillance against “foreign spies inside the U.S.”

But the reality is that the entire surveillance apparatus has been weaponized to spy on one political party for the benefit of the other.

Some Republicans and Democrats on both committees, fearing the continued eavesdropping on Americans, are in favor of significantly revising FISA to protect the privacy of law-abiding citizens.

The Trump administration is divided over the issue, as is Congress.

House Rep. Zoe Lofgren (D-CA) has prepared 5 amendments to FISA that threaten to undermine a watered-down compromise reform package negotiated between Jerry Nadler and Adam Schiff. Senior House Democrats have characterized Lofgren’s amendments as “poison pills” that will doom renewal of FISA in the House.

The main point of contention is Section 702 of FISA, which allows the collection of anyone’s data from Google, Facebook and other social media companies if a foreign target is under surveillance.

Trump’s former campaign chairman Paul Manafort was wiretapped via a secret court order before the election as an outgrowth of his relationship with Viktor Yanukovych (former president of the Ukraine) and Manafort’s failure to register as a foreign agent.

This was all done through a FISA Court warrant, which was illegally done and an affront to the privacy guarantees to U.S. citizens under our Constitution.

And along the way, Deep State operatives unmasked names and conversations of political concern … including many innocent people.

HOW A FISA COURT WARRANT WORKS

To understand the severe implications and misuse of a FISA warrant, we need to examine how it works.

The Foreign Intelligence Surveillance Court, commonly referred to as the “FISA Court,” is a secret tribunal with legal authority to grant (or deny) warrants for electronic surveillance against would-be spies or terrorists.

The court — made up of 11 federal judges, serving 7-year terms and selected by the chief justice of the Supreme Court — meets in private, sometimes in the middle of the night. FISA targets are highly classified.

It oversees requests for surveillance warrants against foreign spies in the United States or foreigners overseas.

Did you get that? Foreign spies or foreigners overseas, not members of the opposing political party right before an election!

But that is exactly what’s happened in the case of Paul Manafort. The wiretapping continued long after the election was over.

Carter Page was also a victim of illegal spying because of his former contacts with a Russian business associate.

We now know the wiretapping and spying on both Paul Manafort and Carter Page was:

Please sign our petition urging congress NOT to renew FISA.

One Comment on “The Foreign Intelligence Surveillance Act (FISA) is a Violation of Your Privacy: Tell Congress to Stop it Now! [Video + Petition]”