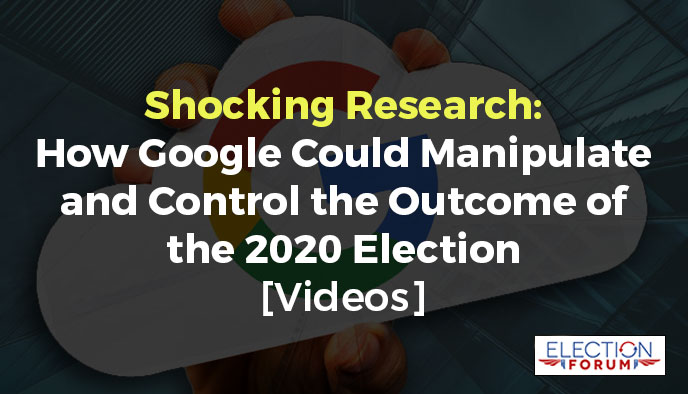 Google is manipulating your internet searches…

Its socialistic, anti-Christian bias is invisibly reflected in the suppression of conservative content from appearing in some search results.

In shocking research that has spanned the past 6 ½ years, Dr. Robert Epstein – former editor-in-chief of Psychology Today and now Senior Research Psychologist at the American Institute for Behavioral Research and Technology – has found that by controlling search results, Google possesses unprecedented power to sway the thinking of undecided voters during an election campaign.

How is it done?

Google can manipulate its search engine algorithm to display one-sided search results that decidedly favor one political candidate over another.

Dr. Epstein is a registered Democrat. He supported and voted for Hillary Clinton in the 2016 election. He has no hidden agenda … and no axe to grind for President Trump.

During the 2016 presidential election campaign, he captured and analyzed “more than 13,000 election-related searches conducted by a diverse group of Americans on Google, Bing, and Yahoo in the weeks leading up to the election…”

During the 2018 midterm election cycle, Dr. Epstein captured 47,000 election-related searches – plus nearly 400,000 web pages to which the search results were linked.

The results of his scientific analysis in both cases were disturbing…

The Google search results in 2016 – which account for over 92% of worldwide internet searches – were significantly biased in favor of Hillary Clinton in all 10 positions on the first page of search results in both blue states and red states.

In 2018, the first-page search results heavily favored web sites and articles favoring Democrat candidates rather than being evenly split between Democrat and Republican candidates.

Very few people who do spontaneous searches ever scroll past the first page of search results. And Google knows this.

Dr. Epstein has conducted dozens of controlled experiments in the U.S. and other countries to precisely measure – through before-and-after questionnaires – how opinions and votes shift among undecided voters when search results strongly favor one candidate over another.

“SEME is one of the most powerful forms of influence ever discovered in the behavioral sciences,” Dr. Epstein said in his congressional testimony, “and it is especially dangerous because it is invisible to people – ‘subliminal’ in effect… Bottom line: biased search results can easily produce shifts in the opinions and voting preference of undecided voters by 20% or more – up to 80% in some demographic groups.”

I can tell you, this is enough voters to change the results of any election.

Dr. Epstein calculated that Search Engine Manipulation Shift likely persuaded at least 2.6 million undecided voters to cast their ballots for Hillary Clinton in 2016 …and perhaps as many as 10.4 million.

In the 2018 midterm elections, Epstein’s evidence suggests that as many as 78.2 million votes may have been shifted to Democrat candidates due to Search Engine Manipulation Shift.

While these acts of interference are troubling and unacceptable, they don’t shift very many votes because they are competitive and visible. Search Engine Manipulation Shift – on the other hand – is invisible and non-competitive.

Dr. Epstein explains: “SEME is an example of an ‘ephemeral experience,’ and that’s a phrase you’ll find in internal emails that have leaked from Google recently. A growing body of evidence suggests that Google employees deliberately engineer ephemeral experiences to change people’s thinking… My recent research demonstrates that Google’s ‘autocomplete’ search suggestions can turn a 50/50 split among undecided voters into a 90/10 split without people’s awareness.”

As expected, Google, Hillary Clinton, and progressive media outlets have all disputed Dr. Epstein’s research and his claims…

They all say in unison that this 2016 study of election-related search results has been “debunked,” and that Epstein’s results aren’t valid because he made “weird methodological choices” in an earlier 2010 study.

They’re just saying this to try to discredit him and convince people to not take his work seriously. They haven’t refuted him either by conducting their own comparable studies … or by addressing his explanations of his methodology.

Incidentally, the number one Hillary Clinton financial supporter in the 2016 election was Alphabet Inc. – the parent company of Google.

You can read Dr. Epstein’s testimony and study the methodology of his experiments here.

He is eminently qualified to conduct the type of research he’s been conducting with Google search – having been a research psychologist for nearly 40 years.

He received his Ph.D. at Harvard University in 1981 and has published 15 books and more than 300 scientific articles on artificial intelligence and other behavioral topics.

Dr. Epstein believes the solution to Google’s search engine manipulation is to end its monopoly over its “black box” algorithm operation.

By requiring that the database they use to generate search results must be available in the public domain – accessible to all – many new search platforms will spring up and compete with Google, providing the same excellent search results.

Incidentally, I find that every time I run a Google search on a topic, I am served biased viewpoints…

Usually a CNN report is first on the list, followed by:

I often have to scroll to page 7 or 8 to start finding conservative viewpoints.

Since 2012, Google has discriminated against and marginalized our editorial content. If they are doing it to us, they are certainly doing it to conservative web sites with higher numbers of subscribers.

Also watch his more detailed interview on the One America News Network (about 9 ½ minutes).

One Comment on “Shocking Research: How Google Could Manipulate and Control the Outcome of the 2020 Election [Videos]”