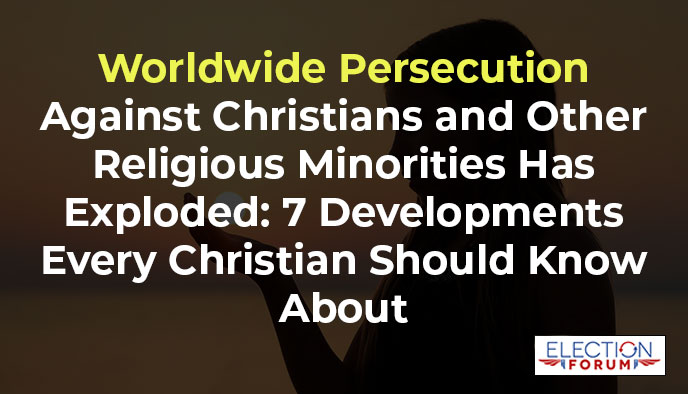 In the U.S. we are very aware of the attacks on synagogues, mosques, and churches.

But very few people are aware of the many arrests of those who would create terror among the population.

For example, Mark Steven Domingo was taken into custody by the FBI for plotting to blow up the Santa Monica pier in southern California. Domingo is a radical Islamic terrorist.

The terror of over 300 Christians being slaughtered on Easter Sunday should have captured the news headlines … and there should have been open discussions as to what to do, worldwide.

But there was silence.

And regarding the slaughter of Christians in Nigeria, Pakistan, Iran, and other countries … there has been media silence.

Here are 7 current event developments every Christian should know about … and should be praying about:

The report highlights the worst abusers of religious freedom … and it offers recommendations to the Trump administration for the role the U.S. could play in ending the human suffering.

The top 10 worst countries for religious oppression (in alphabetical order) are:

The Chinese government regularly pulls crosses off church steeples … and bulldozes other churches and church buildings to the ground.

The government has also forced Bible-believing churches that post the 10 commandments inside their buildings to remove the first commandment.

Christians aren’t the only persecuted religious minority in China…

Concentration camps have been set up for Uyghur Muslims … and a government crackdown is escalating against Falun Gong practitioners.

The U.S. government at all levels should speak out against blasphemy laws in Pakistan, Saudi Arabia and elsewhere.

The State Department should also give attention to other hotbeds of persecution such as:

Christians in these countries are being marginalized … discriminated against … restricted from being able to worship freely … and some are being imprisoned, beaten and tortured for their faith.

The hatred and violence is spreading…

For example, churches, businesses and Christian homes are under attack in India as national Hindis are increasing their governmental influence and power.

Federal and local government agencies work hard to provide security for hard targets such as power plants and government buildings.

More needs to be done to provide at least some security for churches, synagogues and mosques.

One key recommendation is to partner with foreign governments to train and equip local officials to provide better protection for places of worship.

Another is to impose sanctions and other deterrence measures against at least the 10 countries with the worst levels of religious oppression.

Our trade talks with China should not just be about tariffs and jobs. They should also be linked to assurances and actions by the Chinese government to end its hostility toward religious freedom.

The USCIRF report highlights the efforts of the Trump administration to secure the release of Pastor Andrew Brunson from Turkey last year.

We reported on this event in several articles. Click here for the latest one.

Last year I attended the Ministerial to Advance Religious Freedom in Washington, D.C. – sponsored by the State Department. In that historic meeting, a coordinated effort by Secretary of State Mike Pompeo, Ambassador-at-Large for International Religious Freedom Sam Brownback, and Vice President Mike Pence sought to encourage countries to support and defend religious freedom.

Only a few countries agreed…

We still have a long way to go in convincing world leaders to guarantee freedom of worship and religious expression in their countries.

But prayer changes the world. It always has and always will…

2 Comments on “Worldwide Persecution Against Christians and Other Religious Minorities Has Exploded: 7 Developments Every Christian Should Know About”