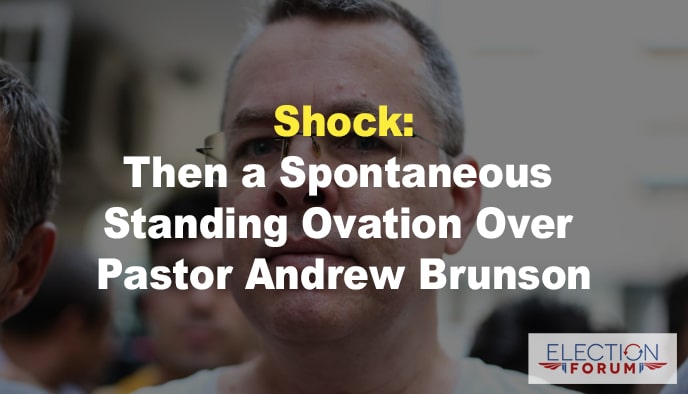 We were all totally shocked.

Then there was a spontaneous standing ovation.

Why? Because of what the U.S. is doing to release Pastor Brunson.

Last week I told you about my trip to the State Department in “Historic and Powerful: 7 Surprising Things You Should Know About My Invite from the State Department [Religious Freedom Video]” [ link to https://www.electionforum.org/uncategorized/historic-and-powerful-7-surprising-things-you-should-know-about-my-invite-from-the-state-department-religious-freedom-video/].

350 government leaders and human rights organizations from 80 countries got to hear the historical, first-time effort of the U.S. to officially pursue religious freedom around the world.

During the conference, Vice President Pence demanded the release of American Pastor Andrew Brunson, who was unfairly imprisoned for 21 months in Turkey.

President Trump also tweeted about Brunson’s imprisonment, saying “Pastor Andrew Brunson, a fine gentleman and Christian leader in the United States, is on trial and being persecuted in Turkey for no reason. They call him a Spy, but I am more a Spy than he is. Hopefully he will be allowed to come home to his beautiful family where he belongs!”

Brunson has been released from prison, but is now under house arrest – and is prohibited from leaving Turkey.

In response to this injustice, President Trump is taking a bold stand for Brunson and for religious freedom. Despite the Turkish government’s warning to the U.S. not to make this a political issue, Trump is sanctioning Turkey’s minister of justice and minister of the interior.

Under these sanctions, neither of these individuals will be able to access any assets they have in the U.S.

Brunson’s next court date is on October 12th – and faces up to 15 years in prison if he is convicted.

The charges against Brunson are that he has ties to a group led by American cleric Fethullah Gulenand and the Turkish Workers Party – believed to be terrorist organizations by the Turkish government.

Now – after 20 years of missionary and pastoral work in Turkey – Brunson is being accused of espionage and terrorism.

In reality, the trial is a power play by the Islamist Turkish president, Recep Tayyip Erdogan. Erdogan is demanding that the U.S. gives up Fethulla Gulen, a strong opponent of Erdogan’s regime and resident of Pennsylvania.

In response to the trial, Brunson’s daughter Jacqueline Funari told us at the Minsterial to Advance Religious Freedom “I cannot tell you how proud I am of my father, and what an example of Christ’s love he continues to be to the world as he is wrongly imprisoned for his faith.”

President Trump’s refusal to back down to intimidation from the Turkish government is historic. Never before has the State Department responded to a violation of religious freedom by imposing sanctions like these.

And, the Senate has included an amendment to the sanctions, proposing that the shipment of F-25 Joint Strike Fighter Aircrafts to Turkey until the Defense Department reports to Congress on the potential effects of Turkey’s attempt to purchase an air and missile defense system from Russia.

Not only that, but Americans are being encouraged to boycott travel to Turkey and Turkish Airlines until Pastor Brunson is freed.

Please pray for Pastor Brunson and his family. Pray that the charges would be lifted and that Brunson would not be convicted during his trial.

One Comment on “Shock: Then a Spontaneous Standing Ovation Over Pastor Andrew Brunson”