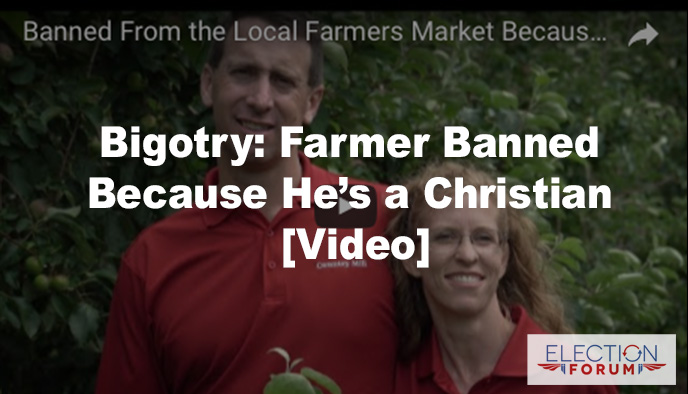 Steve Tennes has always done what he believes is right.

Since 2010, his farm has participated in East Lansing’s Farmers Market and has complied with the city’s “Human Relations” law that makes it illegal for public accommodations to discriminate based on sexual orientation.

Steve has gladly served and sold apples to all comers, regardless of their sexual orientation.

The problem? In 2016, Steve posted on the Country Mill Facebook page about his Catholic beliefs and that marriage should be between one man and one woman.

He further wrote that his farm could only host weddings consistent with his faith.

After hearing of his beliefs, East Lansing officials expelled Steve, telling him that Country Mill could no longer participate in the Farmer’s Market.

Steve has filed a federal lawsuit against East Lansing, alleging a violation of his religious beliefs.

Here’s a powerful 5-minute video of Steve explaining his plight.

Steve sells his apples to anyone.

Steve has the First Amendment freedom not to promote events that violate his conscience.

But when the farmer posted his religious beliefs online (from 22 miles outside of East Lansing), the city excluded his farm from doing business in East Lansing.

It is intolerant for East Lansing to monitor Steve’s Facebook posts and punish him for what he says or does outside of East Lansing.

Ask yourself this. Do you really want government to punish people for what they say or do outside city limits?

The answer is NO. Cities should not have the power to go on seek-and-destroy missions across the country to ban businesses not aligned with their ideology.

Is this the new left?

Is this the left that finds anyone dissenting with their world view as unacceptable?

It is the left in America that has mutated into total intolerance.

Meanwhile, good news. The Supreme Court announced this week it will consider the case of a Colorado baker who refused to bake a cake for a same-sex wedding, taking on the fight over religion and gay rights. We will remember this next week so you’ll have the details and prayer items.

3 Comments on “Bigotry: Farmer Banned Because He’s a Christian [Video]”