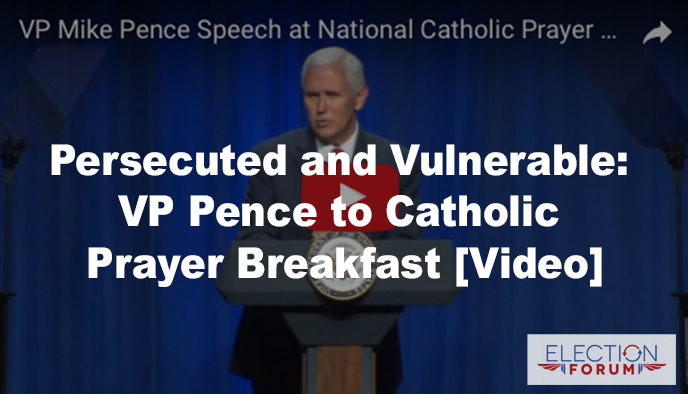 However, if you suffer as a Christian, do not be ashamed, but praise God that you bear that name. (1 Peter 4:16)

Vice President Mike Pence knows about religious persecution in the halls of government and the world at large.

Headlining the 13th annual National Catholic Prayer Breakfast June 6th, he told thousands of Catholics gathering in Washington to share a meal and pray for the country.

As one of six children growing up in an Irish Catholic family, Pence later converted to Protestantism and became an evangelical Christian.

Pence touted the new administration’s commitment to religious liberty and protecting the lives of the unborn.

“President Trump stands with those who are persecuted for their faith around the world, no matter the country they call home or the creed they profess,” Pence told the gathering.

“And our President stands with the most vulnerable, the aged, the infirm and the unborn.”

Pence pointed out that Trump has signed multiple pieces of pro-life legislation, including a congressional review act which grants states the ability to partly defund Planned Parenthood.

He also pointed to the reversal of the Mexico City police to prevent American taxpayer funding to organizations that perform or promote abortions abroad. It was rescinded by Obama and reinstated by Trump.

If you missed Pence’s powerful speech, watch it here.