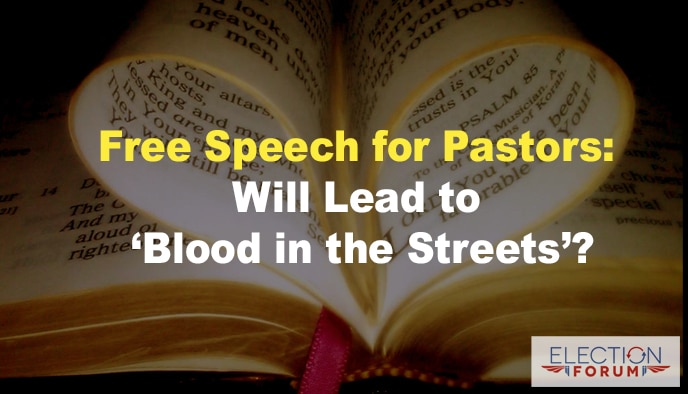 I had to do a double-take.

Did Congressman Ron Kind, a democrat from Wisconsin, make the most outrageous statement of 2017?

He said that if pastors had the freedom to speak from the pulpit it would lead to “blood in the streets.”

In 1954, President Johnson snuck through Congress an amendment that muzzled pastors. It’s called the Johnson Amendment, and it has silenced pastors since that time.

More and more pastors are challenging the Johnson Amendment and the IRS which threatens to take away their tax exemptions. They claim it is a violation of their 1st Amendment free speech rights.

Donald Trump, when he ran for president, promised pastors and evangelical leaders that one of the first things he would do is repeal the Johnson Amendment so pastors can speak out on cultural and political issues … as protected by the U.S. Constitution.

That is one of the major reasons evangelicals supported Trump.

Throughout the history of the church, it spoke up against wrong from the pulpit. It was the salt and light for the community.

If there was an injustice or an issue that required people of faith to take a stand — from the American Revolution to 1954 — that took place from the pulpit.

But the church has been silenced since then.

Now, in the new tax bill, a major lessening of the regulations that helps eliminate the Johnson Amendment is being proposed.

Kind attacked the GOP’s push to repeal the government’s handcuffing churches from talking about politics from the pulpit.

Kind had the audacity to say that letting pastors talk openly about political issues of the day would lead to “blood in the streets.”

He said repealing the Johnson Amendment will politicize the pulpit and create civil war in the pews.

“You politicize the pulpit, it’s going to make the Sunni-Shia conflict in the Middle East look like a picnic.”

Spoken like another progressive liberal wanting to muzzle free speech and debate in America.

I guess Kind skipped the history lesson where the United States of America was founded on Judeo-Christian principles and where many of the founding fathers were either preachers or Bible teachers.

Back in the day, Congressmen prayed together and asked God to lead their decision-making.

Besides, promoting free speech is nothing akin to 1,400 years of sectarian slaughter between Sunni and Shia.

If this isn’t bad enough, Rep. John Lewis, a Democrat from Georgia, echoed the same kind of fear mongering over the tax reform plan’s desire to roll back the Johnson Amendment.

He told Congress that rolling back part of the tax code would pit worshipper against worshipper and wreak havoc on the last pillars of civility in our country.

Amazing rhetoric without a shred of supportive truth.

Where would we be as country if the Rev. Martin Luther King Jr. hadn’t talked about racial segregation and politics from the pulpit?

Where would today’s civil rights laws be if the Johnson Amendment was in force.

No, the amendment was introduced by future president Lyndon Johnson to silence his political opponents.

The keyword is SILENCE, and it has been used as one of the single greatest weapons against free speech in our churches.

Thankfully, President Trump followed through with one of his major campaign promises to help end the Johnson Amendment.

His Executive Order stops the amendment from interfering with everyone’s First Amendment rights. It prevents the government from censoring sermons or targeting pastors and rabbis.

The GOP is trying to make it permanent.

Evangelicals will no longer be silenced in church.

2 Comments on “Free Speech for Pastors: Will Lead to ‘Blood in the Streets’?”