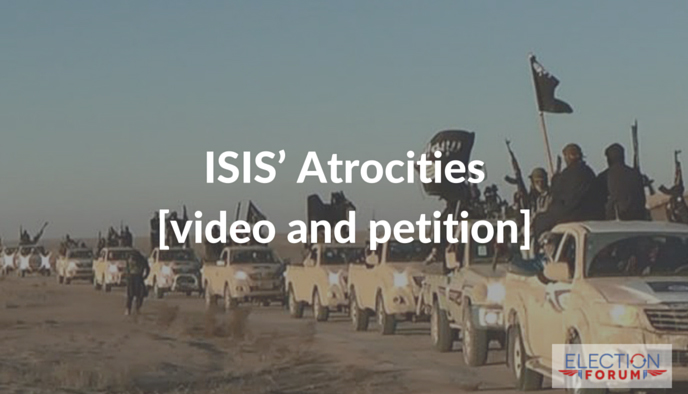 In a videos ISIS released, they threatened to kill 200 Christians if they do not get a ransom of $50,000 for each person.

The video shows three ISIS members as they shoot three Christians in the head. It then shows three more Christians kneeling in the same position for execution, and one of them says the same will happen to them if they are not ransomed.

ISIS has demanded a total of $10 million for the 250 Assyrians they’ve abducted.

They may be about to execute these Christians, as ransom negotiations failed.

They are also using churches as torture chambers. They torture Christians into converting to Islam inside churches that they’ve captured.

The evil brutality of ISIS knows no end. In August, they crucified 7 Christian missionaries after the missionaries refused to renounce Christ.

And they asked two Christian missionary women to renounce Christ as well – when the women didn’t comply, the jihadists publicly raped them. They then beheaded these women and six other men.

ISIS has a “school of death,” where they behead all the men that they’ve captured and sell young girls to be sex slaves.

ISIS has forced thousands of women and children into sex slavery.

Many families have lost all of their children.

ISIS is perpetrating the worst kinds of brutalities and evil.

Christian leaders in Syria are begging the West to stop this evil and are calling the crisis one of “biblical proportions.” The crisis is not lessening; it’s increasing. ISIS is a ravenous wolf, and there is only more killings, more hostages, more trafficking, more brutality – “a struggle with no end in sight.”

All the Christian communities in northern Iraq have been decimated.

Franklin Graham says: “It is genocide – and the world seems largely silent about it. Genocide perpetrated by the Islamic State against Christians, Yazidis, and other religious minorities of Syria and Iraq. And their methods are unimaginably cruel and heinous. Just a few days ago it was revealed that three Assyrian Christians were executed on September 23, which is the Muslim ‘Feast of Sacrifice’….”

“Why were they killed? For refusing to renounce their faith in Jesus Christ. Eyewitnesses said that ISIS militants crucified a 12 year old Christian boy and his Syrian missionary father… They cut off the boy’s fingertips to try to get his father to convert to Islam. They left their bodies hanging on the crosses for two days under signs reading ‘infidels.’”

Remember the persecution of our brothers and sisters in Christ.

You can sign our petition to stop this vicious slaughter, here.

And, you can help our efforts by donating here.

Watch this video put together by the ministry In Defense of Christians: https://www.youtube.com/watch?v=O09bZcQWUT8

2. ISIS Trains over 1,000 Children to Become Suicide Bombers in 6 Months

ISIS has trained over 1,000 children in the last six months to become suicide bombers.

The Islamic militant group opened a “Cubs of the Caliphate” child training center in the group’s northern Iraqi stronghold of Mosul, where children are taught suicide bombing tactics, brainwashed with ISIS’ cruel ideology, and provided military and combat training for the battlefield.

Here are several short videos that give you an idea of what is happening.

Are you praying for our persecuted brothers and sisters in Christ? Will you pray for these kids? Will you pray for revival in the Middle East… for repentance and salvation to those enslaved to the lies of Islam, including the leaders? How about your small group? Your church?

And have you signed our petition yet? Click here.

Have you donated to help us help the persecuted church? Click here.