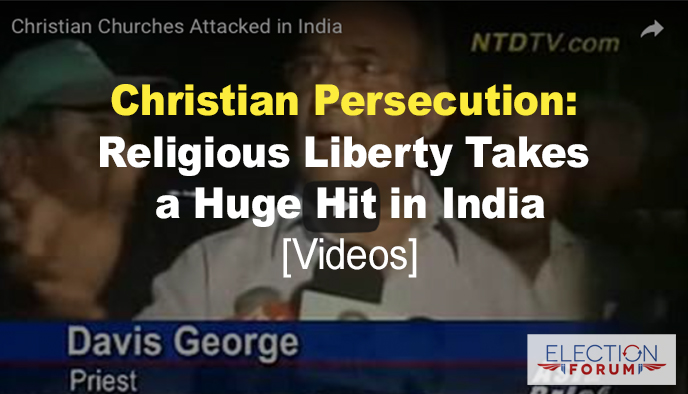 I had the pleasure of meeting with Pastor Mathew Meagher, who is now ministering to Christians in India with a powerful new TV outreach.

He detailed for me some shocking and disturbing trends of persecution and free speech/freedom of religion abuses that should not be happening.

While headlines focus on the brutality of radical Islam, Hindu nationalists are making it tough for Christians in India.

Open Doors International’s “World Watchlist” ranks India right behind notoriously oppressive Saudi Arabia as one of the worst countries in which to be a Christian.

This should come as a shock to many Christians and government leaders.

Let that sink in for a minute … the world’s largest democracy really isn’t a democracy any more … it’s becoming an oppressive regime against freedom of conscience, religion and speech.

And it’s a story few Americans even know about.

I plan to expose this to President Trump, the State Department, Congress and the press.

India is being ignored in the news coverage of global religious persecution.

India, a supposed bastion of democracy, is headed in the wrong direction … fast.

It has fallen far short when it comes to religious freedom.

This is odd. Because in 1976, India enacted the 42nd Amendment of the Constitution declaring that India is a secular nation.

Although its constitution prohibits religious discrimination, there are at least six of 29 states enacting laws forbidding conversions, particularly to Christianity.

Hindu nationalists oppose conversions to any other religion.

And it will get worse before it gets better.

As a result, 65% of India’s population has come under the BJP, both at union and state level.

There are 1.2 billion people in India, and only 2%, roughly 27 million, profess to be Christians.

And these 27 million are increasingly suffering persecution.

According to a published report, more than 12,000 Christians faced persecution in 2016 in the form of:

Many readers know of or are supporters of churches and missions in India. Those may be in “safe” states … but Hindu nationalism is spreading nationwide.

Most attacks on pastors and Christian community leaders have occurred due to accusations of attempting to convert Hindus to Christianity.

For example, Hindus in Bihar forced their way into a Sunday church service and telling believers “we will not allow this foreign religion in our country and if you continue we will kill you.”

Police were called. When they arrived, they took the side of the Hindus.

The police proceeded to ransack the pastor’s home, completely devastating it.

In fact, the police and political leaders are among those encouraging the violence.

The recent BJP victories will embolden the party to more vigorously pursue its nationalist Hindu agenda, bringing anti-conversion laws to the national level.

The pro-Hindu federal government ignores the problem of Christian persecution, instead they are stepping up a campaign to create a Hindu-only India.

Part of the reason for India’s anti-conversion laws stems from politics and a desire to protect social structures.

Christianity challenges this precept by declaring all humans are made in the image of God. All people have rights, including the right to accept Jesus Christ.

Those wanting to bring the gospel to their communities face persecution.

This growing anti-Christian sentiment among Hindus in India is starting to affect U.S. business relations.

Thomas Sudyk, president and CEO of an American technology business and frequent traveler to India, found himself barred entry into the country.

He is convinced he was denied entry because several of his clients are Christian organizations.

Makes sense, when one sees what is happening in that country.

This year, the government of India blocked all foreign donations to Compassion International, a Christian relief group, and other Christian charities, focused on feeding impoverished children.

This despite the fact:

Compassion International closed its doors in India after 48 years of relief work.

That means nearly 600 churches, charities and other groups in India which depended on CI lost funding to help 150,000 children.

Recently, President Trump met with India’s prime minister to strengthen ties between the two nations. Trump should make a stand for religious as well as economic freedom.

One can only pray that the plight of India’s children – and the denial of aid to those children – were discussed.

Meanwhile, we can pray for our persecuted brethren in India.

Here are 2 videos on the kind of terroristic persecution Christians face in India.