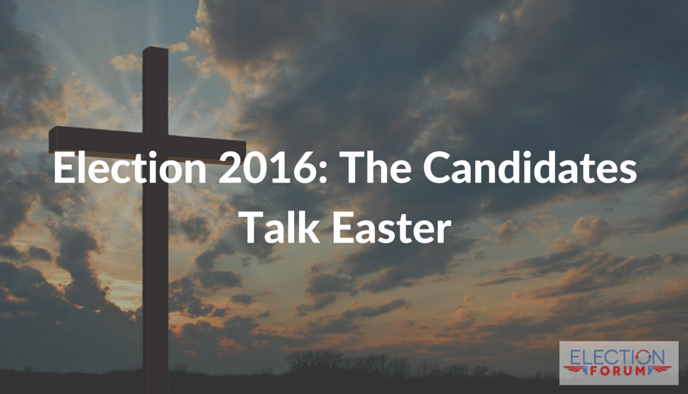 Easter means many things to Christians.

Jesus died for our sins, and gave us His eternal life.

This is holiday is the most important for a Christian, for without the shedding of blood, there is no remission of sins (cf. Hebrews 9: 22)

Easter means everything for a believer in Christ Jesus.

So, what did the candidates say about Easter?

“Well, it really means something very special. I’m going to church in an hour from now, and it’s going to be–it’s a beautiful church. I’m in Florida.”

“And it’s just a very special time for me./ And it really represents family and get-togethers– and something,”

“This weekend, Christians of every denomination remember the most transformative event in history – Christ’s crucifixion and resurrection – the ultimate sacrifice that redeemed the whole world.

“The light of Christ brings hope to every corner of the world. This year Heidi and I pray that in the wake of the Brussels attack, as we mourn for the victims who lost their lives in the subway tunnels and airport corridors at the hands of baseless terrorists, we will remember that the light of truth is stronger than the darkness of terror.

“I am reminded of Saint John Paul II’s first return to Poland as Pope. In 1979, upon his arrival, he kissed the tarmac. And the dust that had all but covered the churches ruptured as the bells rang out – one after another. Soon millions of people lined the streets. And when Saint John Paul II addressed the crowds before the tomb of the Unknown Soldier, he spoke these immortal words: ‘On how many battlefields has that solider given witness to the rights of man, indelibly inscribed in the inviolable rights of the people, by falling for ‘our freedom and yours’!’

“And he asked for the Lord’s blessing upon the land:

“That is the redemption message. By His sacrifice we are made new. And as we remember the gift of salvation on Good Friday and Easter Sunday, let us be so bold to ask the same. We face a different enemy than in 1979 – but one with the same goal – to snuff out the light of freedom. But we also know that just like Communism in 1980 it can be defeated because good overcomes evil, truth illuminates the world, and freedom breaks the bondage of tyranny.”

No other press releases or statements were located for John Kasich, Bernie Sanders, or Hillary Clinton.