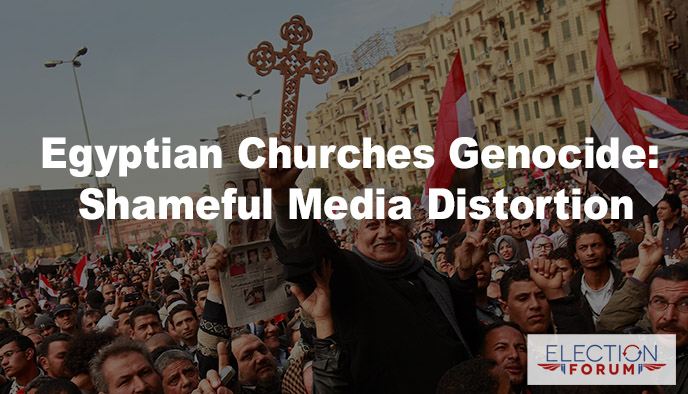 Islamic terrorists are committing genocide against Christians in the Middle East, including Egypt.

Other churches were filled and overflowing, sending a message of the Resurrection power of Christ.

Even at St. Marks that was bombed in Alexandria soared after the bombing, as worshipers defied their fears and crowded into a church whose pillars and altars were shrouded in black cloth.

But the media refused to connect the two horrific bombings and other acts of persecution against Egyptian Christians and genocide.

For example, on Sunday’s Nightly News, NBC correspondent Matt Bradley added that “ISIS quickly claimed responsibility for both attacks, fulfilling a pledge made in February to target Egyptian Christians” and that ISIS “attacks Christians with horrifying regularity.”

But, again, no mention of genocide.

In the past two-and-half years, the broadcast network evening news shows (ABC, NBC, CBS) reported on the persecution of Christians in the Middle East, Africa and South Asia only 60 times. And of those 60 reports just six used the word “genocide.”

According to a 1948 United Nations document, genocide “means any of the following acts committed with intent to destroy, in whole or in part, a national, ethnical, racial or religious group” including killing, causing serious physical or mental harm, preventing births and kidnapping children.

Piers Morgan – a liberal British Commentator – got it right

Morgan said that the latest attack on Egypt’s Coptic Christians was ‘unbelievably significant’ and that ISIS was carrying out ‘a genocidal attack’ on Christianity across the Middle East.

‘You know, if you look at what ISIS really stands for, what they are carrying out in the Middle East, and in Egypt in particular, is a kind of genocidal attack on Christians and Christianity,’ he said.

The Islamic State has trumpeted its intention to seek a foothold in Egypt by slaughtering vulnerable Christians. Its choice of Alexandria, an ancient center of Christendom, for the latest escalation was a marker of its ambitions.

St. Mark arrived here in A.D. 64, according to church teaching, befriending a shoemaker who became his first bishop. Together they established their first church on a site that is now home to a grand cathedral, with giant chandeliers, walls lined with icons and St. Mark’s head preserved in its vaults.

All this heightens the need to pass HR 565 – the Save the Christians from Genocide Act. Tragically, it’s still buried in Congress.

If you have not signed the petition, click here.

If you want to see my last press interview on the bill, click here.