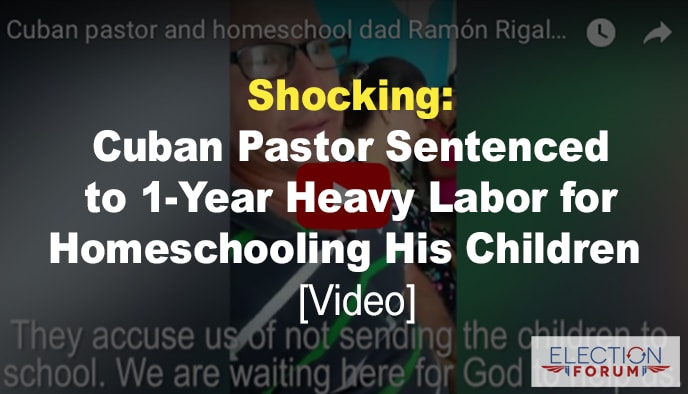 An evangelical pastor in Cuba has been sentenced to a year of hard labor and house arrest for insisting his children be homeschooled.

You can’t defy a communist government that knows what’s best for you.

Pastor Ramon Rigal of Iglesia de Dios in Cristo, said his decision to take his children out of state-run schools is based on his Christian faith.

His reward? He was originally sentenced to a year in prison, which was modified to a year hard labor.

Cubans assigned to hard labor go to a location and place chosen by the state, typically a farm or ranch where heavy work is expected.

The pastor’s legal team was able to prove no criminal laws were violated, yet he received a criminal-type punishment.

A crowd of only two dozen people protested outside the Cuban Embassy in Washington, D.C., in support of the pastor.

They attempted to deliver a petition signed by 31,000 people to the Cuban government but were turned away at the embassy.

For those who believe homeschooling is a fundamental parental right, apparently the Cuban government never got its own memo.

In 2008, Cuba acknowledged that right when it signed on to the International Covenant on Civil and Political rights.

The treaty gives parents rights when it comes to allowing their religious beliefs and convictions to be represented in their children’s education.

We can be thankful that homeschooling and school choice is allowed in the United States.

Meanwhile, you can help Pastor Rigal’s cause by praying:

Watch this short, heartbreaking video of Pastor Rigal at a Cuban police station.