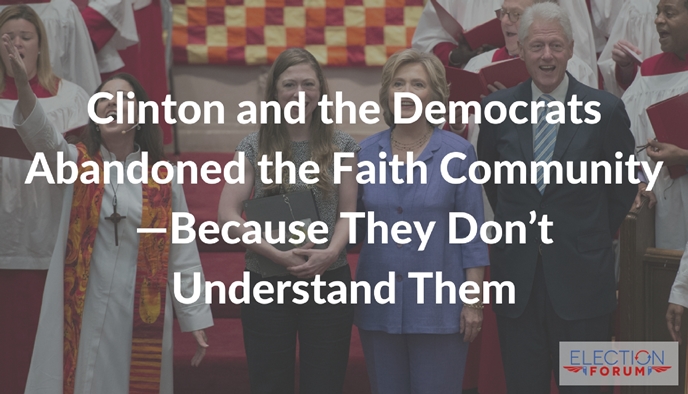 In 2008 and 2012, the Democrats had a heavily financed, well-staffed group dedicated to targeting evangelical to persuade them to vote for Obama and the down-ticket Democratic candidates.

In 2016, the Democrats made no outreach to the faith community.

Michael Weir, Obama’s director for the 2012 faith outreach says that Clinton and the Democrats just didn’t understand Christians and actually campaigned against Christians.

“It’s much easier to make people scared of Evangelicals, and to make Evangelicals the enemy, than trying to make an appeal to them.” He further added that the Democratic Party has pushed out people who are pro-life, and thus limited many of their outreach options. In the past, Democrats at least welcomed a different point of view, including on abortion. “This debate, for both sides, is not just about the abortion rate; it’s not just about the legality of it.”

He then shared: “I came to the conclusion that politics was causing a deep spiritual harm in our country. We’ve allowed politics to take up emotional space in our lives that it’s not meant to take up.

Politically, I definitely feel isolated. But a lot of people feel isolated right now. And personally, I don’t feel lonely because I find my community in the church. That has been a great bond.”