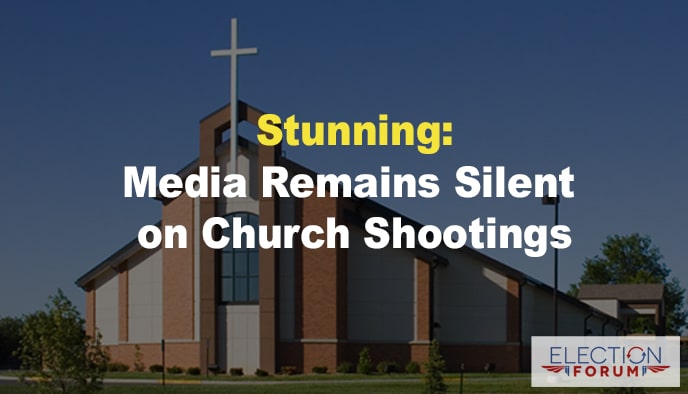 It appears the recent church shooting in Antioch, Tenn., was an attempt to start a race war.

One person was killed outside The Burnette Chapel Church of Christ by shooter Emanuel Kidega Samson, an immigrant from the Sudan. Six others were shot inside and survived.

A note was found in the gunman’s car referring to revenging a white supremacist’s massacre at a black church in Charleston, S.C., two years earlier. (Dylann Roof has since been sentenced to death for killing nine worshippers.)

But why is the mainstream media downplaying the racism inherent in this story?

The New York Times put this mass shooting on Page 14.

Maybe you heard it mentioned in a 12-second blurb at the end of a cable newscast.

I also flipped through channels and didn’t hear it mentioned one time … maybe they got around to it. Fox a little, others not at all.

Of course, out of a 1-hour newscast, about 59 minutes went to kneeling NFL players.

The story has been buried, and that is troubling.

The Sudanese immigrant is black. He murdered a white mother of two. He wounded six white elderly church goers. The rampage was stopped by an usher, who wrestled with the gunman, who then accidentally shot himself. For more on this CLICK HERE.

This shooting, however, just doesn’t fit the left’s narrative like the black church shooting in Charleston, S.C.

Or the every-weekend black-on-black shootings and killings in Chicago.

It’s an uncomfortable topic, to be sure. But so is the media’s unfairness.

But if a white person shoots a black, well, that demands coverage.

No Christian goes to a church service on Sunday morning and expects to be attacked, shot, or even killed.

But unfortunately, as we see persecution of Christians on the rise in America, we need to consider how to be prepared for anything.

The anti-Trump “Resistance” movement never misses a chance to paint the President as a bigot.

Which leads to the progressive left never missing a chance to divide and conquer our country along racial lines.

Attacks against churches are rising

I urge you to train and equip yourself and others to know how to respond to crisis, and to know what your legal rights are as an armed citizen. If you are in an incident of violence, the law is in the hands of the armed citizen until the police arrive to intervene.

That means it’s your responsibility to know how to respond to crisis in order to protect yourself and others from physical harm.

As Christians, we need to know how to prayerfully prepare and respond to crises of violence.

Pastors and other leaders in the church have been given a great responsibility to watch over the flock, to protect them, and help ensure their safety. This extends to church security measures.

Here are 5 things your church should be doing to protect churches and families:

Pray for weekly protection and safety in your prayer ministry. There are multiple prayers for protection in the Bible. Here is a powerful one:

Keep me safe, Lord, from the hands of the wicked;
protect me from the violent,
who devise ways to trip my feet. (Psalm 140:4)

Just like any other ministry team, the security ministry team is a crucial part of the body. As 1 Corinthians 12 explains, the body has many parts, but all are of great importance. Consider the fact that members of your church may be active or retired members of law enforcement or the military- they can be of valuable service to your church. Regardless, all members should be screened, carefully selected, should participate in biblical training and worship, and should be exhibiting a mature walk with the Lord.

What would you do in a crisis like the one in Tennessee? If your church is in a rougher section of town, or is at particular risk for being attacked by religious terrorists, you may want to pay special attention to building a plan for defense.

Here is what one church did to prepare:

The youth ministry may be especially vulnerable to a potential attacker. Kids should be prepared to know what to do during an attack, and specific church members should be responsible for protecting youth during such a crisis.

Consider how your church can help train new churches. Hold a special training event for all the churches in your area.

We are deeply grieved at the tragedy that took place in Tennessee. It also serves as a wakeup call to us all, to prepare and pray.