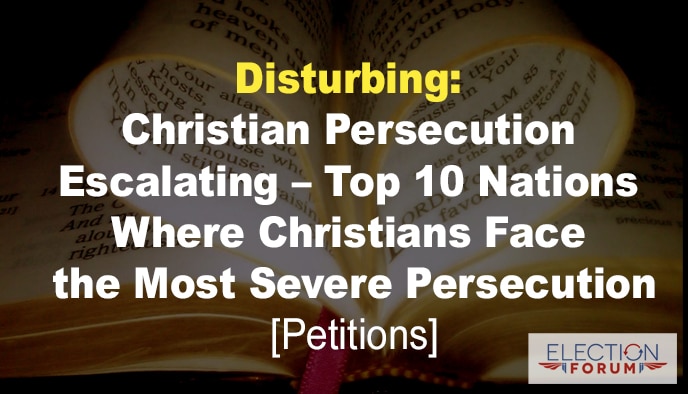 They risk imprisonment, loss of home and assets, torture, rape and violent death because of their faith.

Open Doors USA publishes the Open Doors World Watch List – an annual ranking of the 50 countries where Christians face the most severe persecution.

Here are the top 10 nations where Christians found it most dangerous to practice their faith in 2017:

More than 50,000 Christians in North Korea are in prison or labor camps.

Kim Jong-un controls every aspect of life in the country and demands worship of his family.

Within the 50 countries on the Watch List, 215 million Christians experience high, very high or extreme persecution.

Countries in Africa, Asia and the Middle East are intensifying persecution – especially of women, who often face persecution for both faith and gender.

Every day at least 6 women – because of their Christian faith – are raped, sexually harassed or forced into marriage to a Muslim under threat of death.

But this is only the tip of the iceberg because it only includes those who had the courage to report an incident.

Here are some other trends that are affecting the persecution of Christians:

Just last week in the Shanxi province in northern China, the Golden Lampstand Church was destroyed by China’s military police.

They detonated explosives they had planted in underground fellowship halls beneath the church.

The church leaders have been repeatedly beaten and imprisoned ever since the church was built in 2009.

China was number 43 in persecution of Christians last year.

Please pray for Christians worldwide who are experiencing persecution, physical torture and death because of their faith…

And sign the petition below to save Christians from genocide in the Middle East.

And please also sign the petition to help stop the persecution of Christians in India:  https://www.electionforum.org/stop-persecution-of-christians-in-india/