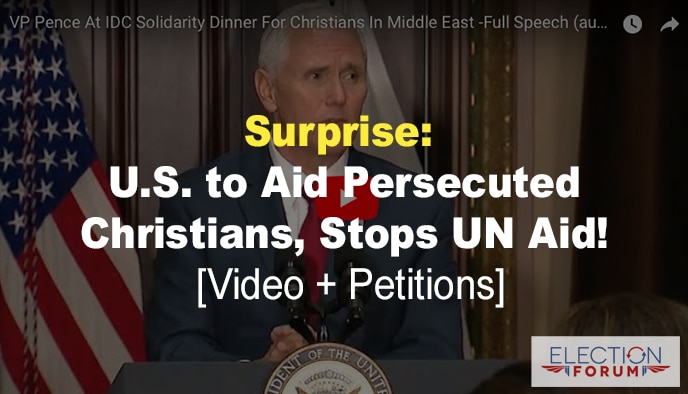 Finally, something positive is happening.

Vice President Mike Pence said the U.S. is coming to the defense of persecuted Christians.

He said the United States will:

The Vice President rightly took the UN to task because it failed to help Christians and other religious minorities facing genocide.

Christians have not been getting the financial aid they should have, as the UN failed to use the funds as intended.

Faith-based groups with proven track records and deep roots in the Christian and Yazidi communities of Iraq and Syria are often denied funding requests by the UN.

In a show of action, the U.S. is pulling the funds from the UN and will direct Christian relief work through USAID.

“Christianity is under unprecedented assault in those ancient lands where it first grew,” he said, “but help is on the way.”

Pence said the U.S. will take the fight to radical Islamic terrorists, whose “vile acts of persecution are animated by hatred for Christians and the Gospel of Christ.”

The shift in funding to USAID is prompted by the UN’s “ineffective relief efforts,” often criticized for being superficial and cosmetic projects.

I’ve pointed out over the years how the UN discriminates against Christians.

Here are two things you can do to help the persecuted church: