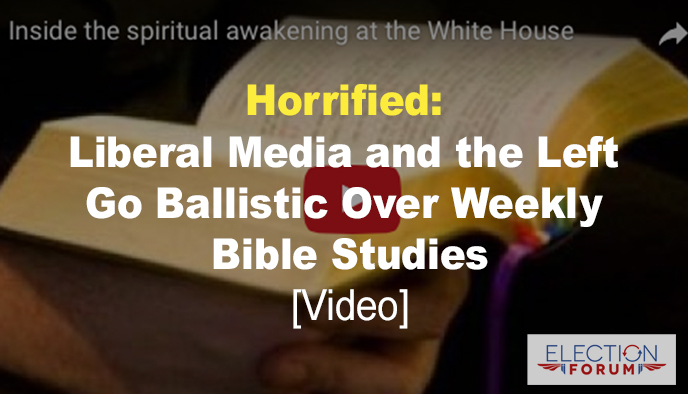 A weekly Bible study in the White House has set off intense opposition.

Many members of President Trump’s cabinet and inner staff profess to be devout Christians.

In fact, Trump’s cabinet has been called “the most evangelical” in the country’s history.

Trump is invited to the study and receives notes following each week’s meeting.

By all accounts, there is a spiritual awakening in Washington, and the liberal and progressive mainstream media is not taking kindly to it.

The weekly study is led by Ralph Drollinger, a clergyman and retired pro basketball player who played for the UCLA Bruins under legendary coach John Wooden.

Drollinger founded Capitol Ministries in Washington, D.C. The group’s goals are to develop biblical ministries of evangelism and discipleship to our government’s leaders.

Also attending is Jay Sekulow, chief counsel for the American Center for Law & Justice and one of Trump’s attorneys.

Our country’s leaders would do well to follow James 4:10:

“Humble yourselves in the sight of the Lord, and He will lift you up.”

Drollinger believes it’s essential for leaders to appeal to God as they seek to set policy.

“For we are His workmanship, created in Christ Jesus for good works, which God prepared beforehand that we should walk in them.”

A reverence for God and the Bible in Washington has strong precedent.

The largest Protestant church congregation in the country used to meet at the U.S. Capitol in the 1800s, with up to 2,000 people attending weekly.

They included members of Congress and the executive branch. Thomas Jefferson attended regularly as president.

Watch this informative 3-minute video on the spiritual awakening at the White House.