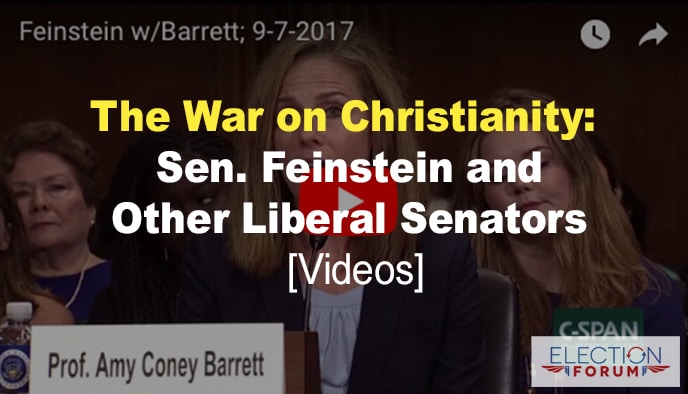 The war on Christianity has been ugly in Washington.

Christians have been terribly and wrongly attacked as the U.S. Senate looks at political appointees.

Sen. Dianne Feinstein called Barrett’s strong Catholic faith “a concern,” even mocking her by saying “the dogma lives loudly within you.”

What should be a hearing on judicial qualifications became a religious inquisition.

Senate Minority Whip Dick Durbin asked her if she was an “orthodox Catholic” and refused to accept her answer.

Sen. Al Franken attacked Barrett for getting paid to give a talk on constitutional law for an Alliance Defending Freedom event.

The ADF is a Christian group defending religious freedom.

The SPLC is a discredited civil rights group that stockpiles money for its founder, Morris Dees. Even the FBI took them off their website as a credible source of hate groups.

The SPLC goes out of its way to smear Christians and conservatives.

What’s wrong with this picture?

The questioning goes against the very U.S. Constitution these politicians are supposed to hold dear.

“No religious test shall ever be required as a qualification to any office or public trust under the United States.”

If you’re a Christian or a Catholic, a routine Senate Judiciary Committee hearing can turn into a religious inquisition.

Imagine if Professor Barrett was an Orthodox Jew, a Hindu, a Buddhist, or a Muslim. Imagine the utter outrage of the Left.  But because she is a Catholic, it’s ok?

This follows a pattern since Trump became President.

In June, Sen. Bernie Sanders played the “Faith Card” against Russell Vought, Trump’s nominee to become the Deputy Director of the White House Office of Management and Budget.

Sanders called him unfit for office because Vought wrote an article saying Jesus Christ is necessary for salvation.

Apparently just believing in Jesus is grounds to bar someone from public office.

Does Bernie Sander’s Jewish faith prevent him from being a senator?

Not any more than someone’s Christian faith prevents them from being a judge.

Professor Barrett never said Catholic teaching should supplement the law or that her faith should have any bearing on the outcome of a case. In fact, she said the complete opposite.

This powerful 6-minute C-SPAN Video should have every Christian concerned about the way judicial nominees of faith are handled differently:

In this disturbing CSPAN segment, the Trump nominee is grilled over religion.

One Comment on “The War on Christianity: Sen. Feinstein and Other Liberal Senators [Videos]”