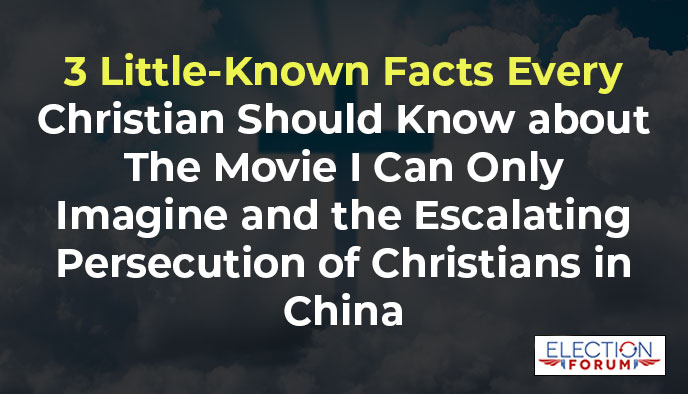 The war against Christianity in communist China is escalating…

But history has shown you cannot stop the gospel with laws designed to curtail it.

You cannot stop the gospel with intimidation.

You cannot stop the gospel with persecution … even to the point of death.

Here are 3 little know facts you should know about what’s happening in communist China today.

Fact #1: The movie I Can Only Imagine is spreading throughout China.

That’s right. Even though Christianity is under attack in a historic assault on people of faith in China, the movie I Can Only Imagine is being seen by millions of Chinese.

In the United States, the movie I Can Only Imagine touched many lives and affected people with its story of redemption and forgiveness.

It grossed more than $83 million in the United States. Since then, it’s been seen in more than 100 countries – including China.

Even though China shuts down churches, imprisons Christians, and is at war with Christianity, the government wanted and allowed the showing of I Can Only Imagine.

Because it was such a hit in the U.S.

In fact, the communist government paid to have it translated and distributed in China.

Praise God. This is partially because every time there is a hit movie in the U.S. China wants it.

Fact #2: China has been tearing down crosses, destroying churches, and imprisoning Christians.

It’s attack on bringing in Bibles has greatly escalated since my wife smuggled Bibles into China during the 2008 Beijing Olympics.

Fact #3: The latest attack has been turning neighbors – and church members – into spies.

In China, some churches are allowed … but they are under constant control and censorship.

So, most churches who want to preach the gospel are under ground. That doesn’t mean they’re small. Some have 5,000 or more people. Some meet in homes, some in other buildings … and some have built their own churches. But all without authorization from the communist government.

And with technology, the government is able to control people’s actions, such as reading the word of God, praying and worshiping together.

The government is offering the public up to 10,000 yuan, or $1,500 USD, for providing information about religious group meetings.

This is part of the nationwide effort to drive what is considered foreign religious traditions that could be a threat to the government, out of the country.

The largest number of these groups are evangelicals.

The evangelicals are the ones who are primarily being attacked, though the government has demolished Catholic churches and convents, Buddhists statues, temples and mosques.

In fact, when I was at the State Department for their first Ministerial on Religious Freedom, the horror stories of what is happening to Christians were terrible. Worse were the prison camps being used for the Muslims.

The government is now also assessing a fine of between 20,000 yuan and 200,000 yuan against those people who are providing facility for church services.

Please pray for the Christians in China – and around the world – who are being persecuted, harassed, imprisoned, physically abused … and even murdered – for their faith.