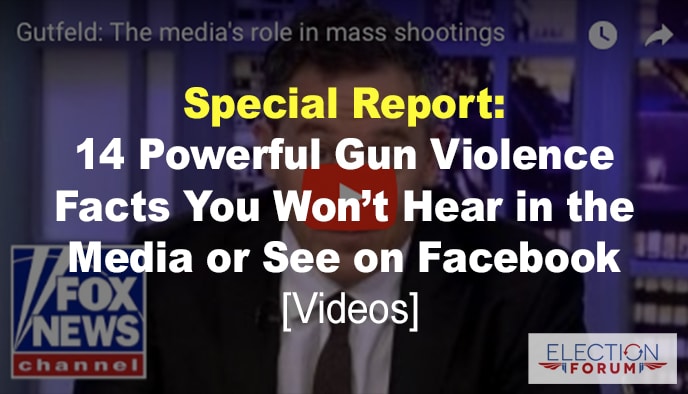 The “March for Our Lives” protests in Washington, D.C. – and in more than 800 other cities in the U.S. and around the world – dominated the news this past weekend.

What wasn’t mentioned in the mainstream media coverage is how anti-gun activists have hijacked the Parkland school massacre and the student survivors to promote their agenda … and shut down any debate regarding common sense actions designed to prevent future mass shootings in schools.

What was advertised as a demonstration about stopping gun violence ended up being a huge anti-Second Amendment rally … in which the NRA and law-abiding gun owners were vilified for the heinous act of one deranged criminal.

Here are 14 important facts you should know about the “March for Our Lives” movement … and about the causes of – and the solutions for – gun violence:

An estimated 200,000 students and anti-gun advocates gathered in Washington D.C. … and a total of about 2 million in more than 800 other cities.

Teachers and administrators joined with progressive activists to organize and coordinate messaging and talking points.

Barack Obama has said it best: “Change requires more than righteous anger. It requires a program, and it requires organizing.”

Specifically, the progressives used the marches to:

One of their selected spokespersons – Parkland shooting survivor Emma Gonzalez – wore an Army fatigue-like shirt at the Washington D.C. rally … containing a communist Cuban flag on the right sleeve rather than an American flag.

They are totally ignoring the failure of government to consistently enforce existing gun laws … which would have prevented the Parkland shooter from purchasing his arsenal of weapons.

No mention was made at the Washington, D.C. gathering of any of these government failures:

The progressives and the media have thrust David Hogg and Emma Gonzalez – two of the Parkland survivors – into the limelight as their preferred spokespersons for the demand to end gun violence.

Neither of them seems to be interested in discussing gun violence – or debating gun policy – with those who disagree with them.

Students and parents who support the Second Amendment were banned from speaking at the Washington, D.C. rally…

And there was no mention of the Great Mills High School shooting in Maryland that had occurred 4 days earlier … in which the school resource officer engaged and stopped the shooter.

Former Arkansas Governor Mike Huckabee reacted to the D.C. march by praising the students for “their passion and their energy, and for their interest in helping to shape public policy…”

Kyle Kashuv – a junior at Marjorie Stoneman Douglas high school – created a mobile app that encourages students who are struggling with any social behavior issue – including thoughts of harming themselves or others – to reach out to other students for help.

His views have been largely ignored by the progressive mainstream media.

He believes it’s ironic that some of his fellow students want to put their faith and trust in government to stop mass shootings … when government failures have been responsible for allowing so many of them to happen.

Hogg has ignored the offer.

Everyone – including the NRA and law-abiding NRA members and gun owners – agrees:

There is probably no other moral issue facing our society that has such universal agreement: the murder of anyone in cold blood is hideously wrong.

But this is where the agreement ends…

What’s causing the carnage – and what should be done to stop it – are not easy questions to answer … but both are crucially important.

If we try to stop gun violence without having any desire – or making any attempt – to identify, understand and address the causes of the violence … we will accomplish nothing significant or lasting.

If we restrict guns without addressing violence, we solve nothing. Violence originates in the human heart.

A violent heart without access to a gun will simply resort to an alternate weapon:

All of these “tools” kill … all of them are being used by killers today.

And the possible choice of deadly weapon is endless…

It makes no sense to attempt to ban all weapons that could possibly be used to commit murder.

What needs to be banned is violence against fellow human beings…

This leads to another principle that can’t be ignored … as controversial and as uncomfortable as it is to talk about.

In cities all across the nation, gang violence kills innocent children … and adults.

Unless the human heart is transformed from within, school violence – as well as all other forms of violence – will continue.

The anti-gun survivors of the Marjory Stoneman Douglas High School shooting have complained in media interviews that an 18-year-old was able to walk into a gun store and purchase a gun – as if that should be illegal.

But an 18-year-old is considered an adult in this country … capable of:

Therefore, it makes no logical sense that an 18-year-old shouldn’t be permitted to purchase a firearm … unless they are also prohibited from voting … and from the other adult activities listed.

But when gun violence occurs, we blame everyone and everything except the shooter.

In the Florida school shooting, the following have been blamed:

No one seems to want to hold Nikolas Cruz responsible for the deaths of 17 high school students.

He should be convicted, sentenced to death, and justice should be administered swiftly. This would be the most effective deterrent against this type of crime being repeated by someone else.

No one seems to see the irony in the belief by the majority of Americans that all morals are relative except gun violence.

To properly address the issue of gun violence, the following moral values need to be taught again in school, church, and home:

But laws must apply to all citizens equally…

Laws may not oppress or discriminate against one group of people to fulfill the wishes or provide desired benefits for another group.

Therefore, gun control legislation is not the answer…

Banning sports rifles like the AR-15 is not the answer…

A gun-free zone is an open invitation to a criminal to commit violence – uninterrupted and unimpeded.

With schools currently being gun-free zones by law … if a parent with a legal permit to carry a firearm were to go on a high school campus and stop a deranged killer by shooting him … he could be sentenced to federal prison for discharging his weapon in a gun-free zone.

This is an insane law…

Prayer is a needed and necessary part of every response to school violence of any kind:

Watch Tucker Carlson’s take on the solution to gun violence promoted by the Washington, D.C. march – and his discussion with Erica Thomas – a Georgia state representative and advocate of gun control (10 minutes).

Finally, watch Greg Gutfield’s 4 points on how to stop mass shootings – and the media’s role in promoting these atrocities (10 ½ minutes).

Warning: there are 3 inappropriate curse words bleeped out in the video:

2 Comments on “Special Report: 14 Powerful Gun Violence Facts You Won’t Hear in the Media or See on Facebook [Videos]”