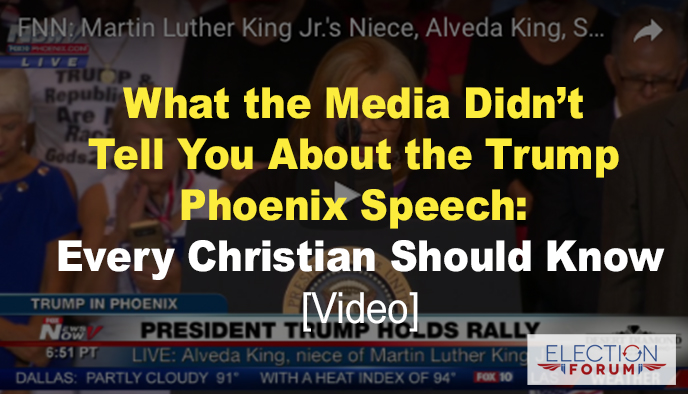 Every Christian should know what happened in President Trump’s Phoenix rally, which was televised nationwide and had 19,000 people packing the convention center.

The media never said a word.

They never told you about the 4 main speakers before Trump’s appearance:

Collectively, they spoke beautifully on:

Their prayers left me in tears.

Mike Pence especially talked about turning the nation around through repentance, citing 2 Chronicles 7:14:

“If My people who are called by My name will humble themselves, and pray and seek My face, and turn from their wicked ways, then I will hear from heaven, and will forgive their sin and heal their land.”

Alveda King prayed for revival and ended by singing the hymn, “How Great Thou Art.”

The Rev. Franklin Graham summed up the despair and hope for our country and a return to God.

They truly prayed, from the heart, for our country.

But not according to the national media, which remained silent when not bashing Trump.

The media did incorrectly, hysterically and emotionally oppose Trump’s speech in their reports.

They called the speech “Angry” “A Tirade,” “Divisive” “An All-Out Assault.” NBC was “Aghast” at Trump’s “Tirade,” that it might be a “Threat to National Security.”

Liberal Jay Clapper, the former director of National Intelligence, and the man who lied about America spying on its own, is dutifully marched out by several news channels to give his take on the speech.

Clapper, who doesn’t hide his contempt for Trump, called the speech “downright scary and disturbing.”

Watch this powerful 7-minute video by Brent Bozell of the Media Research Center on the bias of Clapper and the media:

In Los Angeles, the local media is about as bad as the national media.

KCAL spent 2 minutes on “Trump’s angry speech” and 4 minutes on protestors outside, KTLA spent 1 minute on the speech, and more time tearing down the President, NBC questioned if Trump was “contradictory” and went to Clapper for their source on how scary they feel Trump is.

Is it any wonder why Trump blasts news organizations as “The Crooked Media”?

Evita King showed a powerful reverence for God. It wasn’t a talk as expected, but a prayer that reached across the racial divide and called the nation to repentance. This is a must-hear.

Immediately afterwards, the Rev. Franklin Graham came out and gave an amazing prayer for unity that reached across party lines and racial divide. I recommend you listen to this as well.

Repentance and revival is on the way!

9 Comments on “What the Media Didn’t Tell You About the Trump Phoenix Speech: Every Christian Should Know [Videos]”