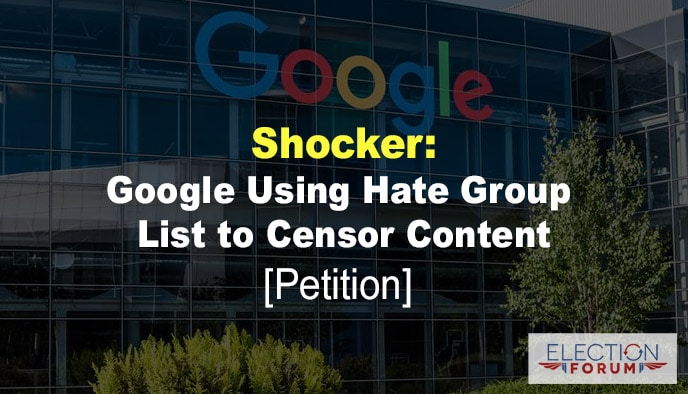 Google has been long suspected of manipulating its search engine algorithm to hide content from conservative, Christian, and libertarian sources – in effect, censoring their content.

Countless examples of apparently biased political and religious search engine results have been cited to bolster the allegations of censorship.

We have written about Google bias here and here.

And Dennis Prager has filed a lawsuit against Google for allegedly censoring some of PragerU’s  YouTube videos that promote conservative rather than progressive views on social issues.

But now there can be no doubt that Google is censoring content it doesn’t like or agree with.

Because it relies on the Southern Poverty Law Center (SPLC) to “monitor” and flag “extremist content” on the internet.

The SPLC puts any group or individual that:

on its “hate list” of over 900 organizations and individuals.

HUD Secretary Ben Carson is on the list. So is conservative news commentator Laura Ingraham….

So are at least 4 strongly pro-life Christian organizations:

Antifa – the group that physically and violently attacks those it disagrees with politically – is NOT on the list.

The FBI, the U.S. Army – and the Department of Justice under Barack Obama – all disassociated themselves from the SPLC – either for its ties to domestic terrorism or its reckless hate labeling.

Even left-wing Politico says the SPLC is “a problem for the nation.”

And yet Google CEO Sundar Pichai trusts the SPLC to tell him which content to censor … while at the same time claiming he leads his company “without political bias.”

Watch this video regarding Google’s use of the SPLC to monitor and censor YouTube videos (4 minutes).

Sign our petition here to help stop the unethical and harmful SPLC.