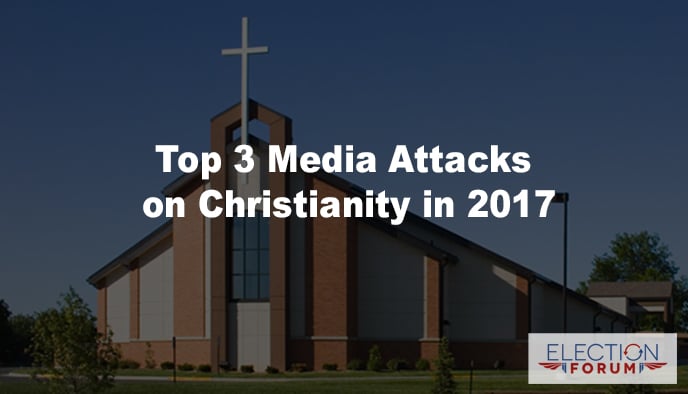 The media constantly attacks Christians and Christianity…because of our worldview.

The media is predominantly secular, pro big government, and relativists.

So here are the top 3 media attacks on Christianity in 2017:

The Washington Post published an OpEd claiming that Jesus Christ is a fictional character who never existed.

The article was published on Christmas Day…

If Jesus never existed, then of course Christmas is meaningless…

Another article in Newsweek asserted that celebrating Christmas is the same as praising white nationalism.

Apparently, the writers of these articles have never taken the time to peruse the portion of Antiquities of the Jews by Flavius Josephus that deals with Jesus of Nazareth – who was just as real as Josephus himself and the Roman emperors who lived during the first century.

There is more than ample historical evidence of the existence of Jesus from:

Media Attack #2: ABC/CBS/NBC/CNN and other media use the SPLC “Hate Map” to attack Christian organizations.

The Southern Poverty Law Center (SPLC) bills itself as a watchdog of hate groups. It publishes a list of “hate” groups each year.

Its “Hate Map” identifies hate groups across America, but the SPLC puts Christian, conservative and anti-Islamic extremist groups in with hate groups.

The list includes groups that are pro-life or that advocate marriage only between a man and a woman, as they equate these positions as being hateful toward women and gays.

This false and unfair categorization is well-known; professionals would never pay attention to its horrific distortion of truth.

But that didn’t stop publications like Newsweek, and news organizations like CNN, from broadcasting misleading stories based on the SPLC “hate group” label.

“Donald Trump to speak at hate group’s annual event, a first for a president,” screamed one Newsweek headline.

Both articles dealt with Trump’s address at the Family Research Council’s annual Values Voter Summit, a conference sponsored by many mainstream conservative groups – a conference I was at and can tell you there were no “hate” groups.

The pro-family value FRC is on the SPLC’s “hate group” list. So, it figures that anyone who attended the event, even Trump, is a “hater.”

Christian florists, farmers, photographers, and more were fined, found themselves in court, faced with jail…even “reeducation”. Why? Because they are Christians.

Take the many bakers under attack.

Two cases of Christian bakers refusing to bake a wedding cake for a gay wedding were in the news last year: one in Colorado and one in Oregon.

The Colorado case began in 2012 and was heard by the Supreme Court on December 5th. The court hasn’t yet reached a decision.

The Oregon Bureau of Labor and Industries fined Melissa and Aaron Klein $135,000 for refusing to bake a cake for a lesbian couple on the grounds it would have violated their Christian beliefs.

The Oregon Court of Appeals upheld the ruling, which forced the Kleins to close their business.