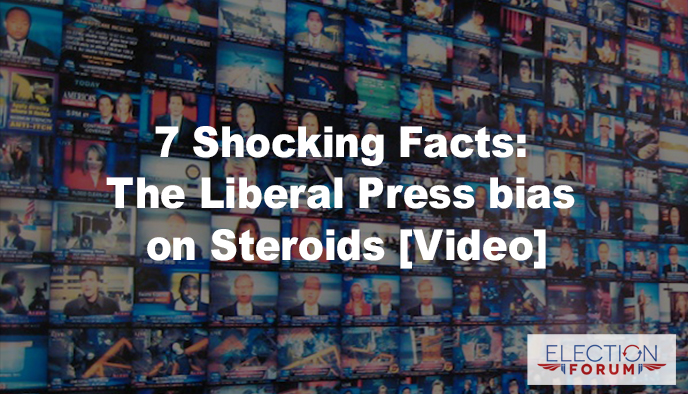 The news on TV, Facebook, radio and the internet is biased propaganda with a political agenda.

It’s not news.
It’s not trustworthy.
It’s not objective.

Daily, the Anti-Trump Press has one new “crisis,” “blunder,” “scandal,” “Russian collusion,” “election rigging,” “irrational corruption,”… on and on.

1. The Press is liberal, it shapes their worldview.

A recent study of the evening news on ABC, CBS and NBC found that 89% of the broadcast networks’’ coverage of President Trump has been negative.

The Press has assumed the role of the opposition party. Its purpose is to:
• Undermine confidence in the President
• Make the President look corrupt
• Show that he is incompetent
• Cast doubt on Trump’s truthfulness

Whatever the news story of the hour, it’s to trash the President.

For example, you’ll see lots of coverage and stories from angry, hurting opponents of Trump, but little if any coverage of supporters. And if there is, it’s embarrassing coverage.

The network anchors and reporters slant the comments, omit facts, even inject their own Anti-Trump tone in their voices.

2. Even local coverage is viciously slanted.

In the past, local TV coverage stood for objectivity.

Take the LA Market. In my study, 94% of the coverage has been anti-Trump, most so bad as to shame viewers.

Dave Bryan of K CBS/KCAI once tried to be objective. NO longer. The anti-Trump propaganda and the promotion of a liberal, collectivist point of view – with no balance, is non-stop.

3. The Washington DC Press Corp is unbalanced and not objective.

Out of 63 reporters in the White House press corps, only 5% are Republicans…that’s 3 of 63.

4. CNN and MSNBC gave up on being objective, they are propaganda mills.

The programming at CNN and MSNBC is official statist, pro Democrat, anti-Republican, anti-values. It’s lost all pretense of objectivity.

5. If Trump wasn’t President, the media would still be trying to brainwash the public.

If VP Mike Pence, Senator Marco Rubio, Senator Ted Cruz or Governor Kasich were President, they would still get the same attacks, propaganda and fake news. The Press has become the opposition party and they have a mission.

6. Treat news as if you were talking to the homeless.

If you have ever ministered or worked with the homeless, you’ll soon be cautious about what they are saying.

It’s the same with the media.

Sadly, don’t trust it, it’s like listening, reading or watching the Democratic National Committee or the Socialist Workers Party interpreting events for you.

7. People are being programmed and trained in liberal economics and values.

The sad truth is too many do not believe in objective truth, understand economics or even know history and the Constitution.

They are being misled and are believing a lie.

We must be truth bearers, we must be educated enough to explain and proclaim why something is false and what reality is.