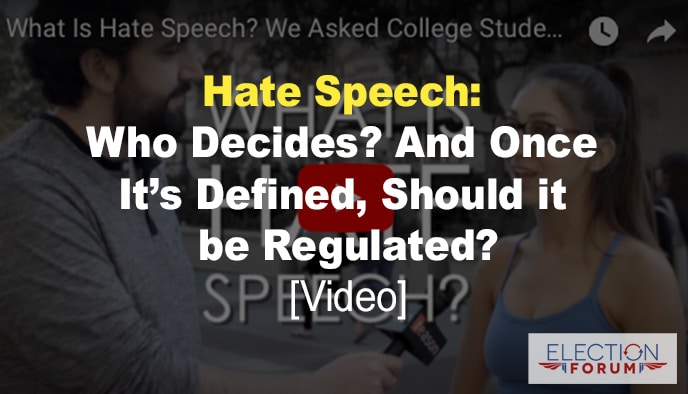 What do you think of when you hear the term “hate speech?”

Does it conjure up images of torch-wielding mobs in Charlottesville?

Or images of rioters protesting the acquittal of a white police officer from charges in the shooting death of an African-American?

What about cartoons making fun of the Islamic prophet Muhammed?

Should the federal government define and then regulate “hate speech?”

40% of Americans think so … in spite of the fact that the 1st Amendment of the U.S. Constitution grants absolute protection of even the most vile speech – as long as it doesn’t directly incite violence…

There is no special legal treatment of hateful words.

Canada and much of Europe have passed laws that criminalize what is considered hate speech:

Are words of hatefulness, bigotry and ignorance best handled through the free exchange of ideas – or by the criminal justice system?

Do colleges have an obligation to allow students to hear a wide range of ideas – even offensive ideas – or is their responsibility to shield students from words expressing hatred?

The question is: who would determine what crosses the line into the area of hate speech … and what falls just short of the so-called hate speech boundary?

Two researches went to a southern California university campus and asked college students for their opinions regarding several questions related to hate speech.

Watch their responses at the link below (about 6 minutes):

One Comment on “Hate Speech: Who Decides? And Once It’s Defined, Should it be Regulated? [Video]”