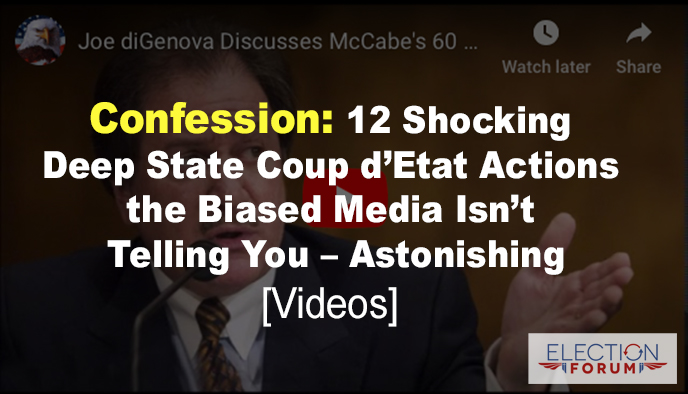 The Department of Justice … the FBI … the CIA and NSA … have all been conducting a silent, behind-the-scenes coup d’etat to remove President Trump from office.

Former FBI Deputy Director Andrew McCabe confessed in his upcoming book – and in national TV interviews – that there has been an ongoing, historic conspiracy among the top officials in the Department of Justice and U.S. intelligence and law enforcement agencies to:

The mainstream progressive media has participated in this attempted coup by constantly and relentlessly:

Here are 12 shocking and disturbing things about the Deep State’s efforts to destroy the Trump presidency that the media is hiding from you … but that you need to know:

The 25th Amendment provides for the succession of power from the President to the Vice President if the President becomes physically incapacitated and unable to carry out his day-to-day duties.

2. Top officials at the FBI and DOJ engaged in “counting votes” of cabinet members they believed would agree to invoke the 25th Amendment as justification for removing Trump from office.

President Trump’s agenda of putting America first in trade agreements and in treaties with foreign nations so threatens the globalists … who want to end U.S. national sovereignty and create a “new world order” … that they want him out of office no matter what the cost.

3. Top officials at the FBI and DOJ discussed setting up a meeting with President Trump for the purpose of entrapping him in a self-incriminating statement about why he fired FBI Director James Comey.

When no evidence could be found of collusion between the Trump campaign and Russia to influence the outcome of the 2016 election … the Deep State turned to “obstruction of justice” as justification for impeachment.

When it was revealed that Rod Rosenstein, Deputy Attorney General, considered wearing a hidden recording device into a meeting with President Trump in an attempt to entrap him, Rosenstein dismissed the allegation by saying they were joking.

Never in U.S. history has such a “Banana Republic” action ever happened…

Not only shameful … not only dangerous … but a violation of fundamental constitutional rights.

4. After FBI Director James Comey was fired, Deputy FBI Director Andrew McCabe opened a secret counterintelligence investigation of President Trump – under the suspicion he was acting as an agent of the Russian government.

There was absolutely no evidence or reason for conducting a counterintelligence investigation of a duly-elected U.S. president.

This was an unprecedented act of sedition against a sitting president.

All of the heads of executive branch agencies and departments serve at the pleasure of the President of the United States. He has the constitutional right to relieve any of them from duty at any time, for any reason.

They both signed off on the FISA application to secretly spy on President Trump.

We don’t know the specific content of the FISA application to spy on the President of the United States – and we may never know what their “justification” was.

But it’s clear they both hate Trump and want him removed from office in any way possible.

Andrew McCabe was fired for leaking classified information to the press and then lying about by saying he hadn’t done so.

Rod Rosenstein is leaving the Department of Justice in March of this year. He faces potential legal prosecution for his seditious actions … as does Andrew McCabe.

6. The biased media claims these acts of sedition have been “patriotic.”

Instead of being outraged, the anti-Trump media and progressive anti-Trump politicians applaud the attempted coup as a patriotic act to save the country from a dangerous threat to our democracy.

What they really mean by that is that they are trying to save themselves from President Trump’s direct challenge to their power and to their agenda of obliterating American national sovereignty and creating a one-world government and economic system.

Watch this audio of former U.S. attorney Joe diGenova discussing the ramifications of the attempted coup to remove Trump from office (about 15 minutes).

If you haven’t ordered my book The Deep State: 15 Surprising Dangers You Should Know – now is the time. It will give you a complete, unique and concise look at the bureaucracy at war with you and your family.

You can order it on Amazon, including Kindle. Click here.

Or go to DeepStateBook.com and I will sign a copy for you and a special discount.