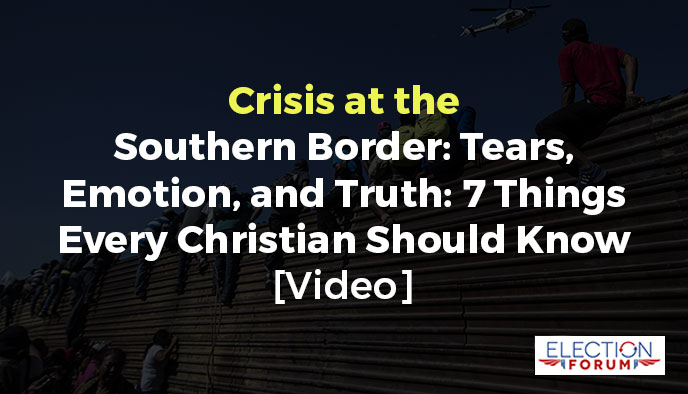 As Christians, we must stand on high moral ground.

When we see wrong, we must expose the wrong with the truth.

When falsehood is spread, truth must be articulated.

When the government does wrong, people of conscience must stand and proclaim what is right.

It’s not Republican. It’s not Democrat. It’s what is right.

The confusion that exists over what is happening with our southern border – with close to one million people flooding into the United States illegally – has disturbed many.

Distortions and falsehoods have added to the confusion … and have caused misunderstandings.

Here are 7 things you should know about the border crisis that the media is not telling you … and that many politicians are lying about:

1. Are women and children being mistreated?

The media, Facebook, and politicians are saying they are being mistreated.

If children or women are being mistreated, we must shed light and be a voice of truth.

You hear it is a fact they are being abused…but there is no evidence, just political rhetoric.

When I heard what was supposedly being done, I was distressed and shocked.

So was Pastor Samuel Rodriguez. He took other pastors down to the same facilities to which the politicians and media went.

What he said was very different from what they were saying. Women and children were not abused.

“I read the reports, saw the news clips,” Rodriguez, a California megachurch pastor, said. “To my surprise, I saw something drastically different from the stories I’ve been hearing in our national discourse. Even as a veteran of immigration advocacy in the U.S., I was shocked at the misinformation of the crisis at the border.”

“We found no soiled diapers, no deplorable conditions, and no lack of basic necessities.”

Rodriguez was “full of indignation” when he first read the mainstream media reports last week. The New York Times report quoted one lawyer saying that children were being “locked in their cells and cages nearly all day long.”

“No one is sleeping on cement whatsoever. There were three-tiered cots for the older kids. The younger kids had even better areas actually.”

“It looked a lot more like as if it were a summer camp environment as it pertains to snacks being ready, cots, that sort of thing, television stations,” he continued. “It looked more like that than anything else. Again, it’s not an ideal world because it is still a detention center. It had that sort of vibe, that sort of atmosphere to it.”

“We did not see cages, locked doors, filthy facilities. These agents were professional. They were conscientious. They were caring. They were giving themselves in a way that showed that these kids mattered. I was amazed at how hard they work and how professional they were while they served those that were in their detention center at that time.”

According to Todd Lamphere, pastor of Global Outreach for Paula White Ministries:

“These Border Patrol agents are highly competent, deeply compassionate and unbelievably caring toward those who they are called to watch and serve over. They have become part-time childcare workers, part-time cafeteria workers, part-time social workers and part-time medical assistants all while having to be law enforcement officers as well. The Bible talks about giving honor to whom honor is due and these amazing men and women in green deserve all the honor that we can give them.”

These remarks are in complete contrast with the progressive media reports and Democrat politicians.

“Officers were keeping women in cells with no water and had told them to drink out of the toilets. This was them on their GOOD behavior in front of members of Congress.” When media asked if she witnessed this herself, Ocasio-Cortez did not respond.

Ocasio-Cortez also said she “forced” herself into a cell with women who described their treatment at the hands of border officers as “psychological warfare.”

“[W]aking them at odd hours for no reason calling them whores…They said they’d gone 15 days without a shower and were allowed to start bathing 4 days ago (when visit was announced).”

“Some women’s hair was falling out,” Ocasio-Cortez wrote. “Others had gone 15 days without taking a shower.”

Samuel Rodriguez responded to Ocasio-Cortez and the other Democrats:

“I’m totally baffled by the reports of politicians who visited exactly where I visited and saw exactly what I saw. Our political leaders—Republican and Democrat—need to decide whether they are going to be pundits or legislators. But the only way to solve our broken immigration system is bipartisan legislation. I have no interest personally in being a pundit. I just want to deal with the facts and to finally solve this problem.”

2. What is really going on?

The massive invasion of thousands of undocumented immigrant children is historic.

Basically, people from all over the world, but primarily from Central America, know they can illegally come to the U.S. and have a pretty good chance of staying.

They get free healthcare—the best in the world.

They get free education—the best in the world.

They get free money—food stamps, vouchers, cell phones and more from government programs.

And if they bring a child with them, it’s like a free ticket.

It’s estimated that 60% of migrants attempting to come into the U.S. are single males accompanied by a child – which sometimes isn’t even their own child.

Those with children stay in America. They first must go to a detention center. At Customs and Border Protection (CBP) detention centers and facilities, they are held temporarily before being transferred to long-term shelters opened by the Department of Health and Human Services.

These detention centers and shelters have been overcrowded. There isn’t enough staff nor big enough facilities. The conditions are not good—but nothing like described by politicians and the media.

3. We should have compassion for the people who are coming to the U.S. illegally.

America is a beacon of liberty and the hope of many.

That’s why so many millions of people want to come to the United States. The freedom, the opportunity, and the hope for a safer community are true. No place other than America are people so blessed.

My wife and I were thanking God just the other day for being born in America.

If I lived in one of these other countries, I would be trying to get to the United States. If I couldn’t do so legally, I would probably do so illegally.

4. It is wrong—very wrong—to call the detention centers concentration camps.

Alexandria Ocasio-Cortez compared border detention facilities to concentration camps. The Holocaust Museum, well-known for its non-partisanship, issued a statement saying it was unacceptable to compare U.S. immigration policy and our border facilities to the camps where 6 million Jews died.

To compare the facilities to the death camps run by the Nazis who murdered 6 million Jews and millions of others is wrong. Very wrong.

Be sure to watch the video at the end of this article.

5. How large is the flood of illegal immigrants?

6. Why are they not deported?

Current immigration law allows illegal immigrants to be detained for only 21 days, after which they must be released until their deportation hearing.

Approximately 90% of illegals released from detention disappear into the U.S. and never show up for their deportation hearing. The federal government currently doesn’t have the resources to track the whereabouts of released illegals … nor enough immigration judges to process their cases within 21 days.

7. Who’s at fault for our broken immigration system?

Together, they have created a situation that is overwhelming the immigration system.

The biased media has:

To blame just the border patrol and the Trump administration for the fact that people are travelling thousands of miles and endangering their families … risking death and disease … is wrong.

To open our borders to unchecked human trafficking, unchecked drug trafficking and unchecked gang infiltration is wrong … and a threat to the security of every community in the nation.

No one should think that they can get into the United States by using the system, yet that is exactly what people believe.

There are even agitators explaining to people how to get into the United States illegally.

Here’s what needs to be done: