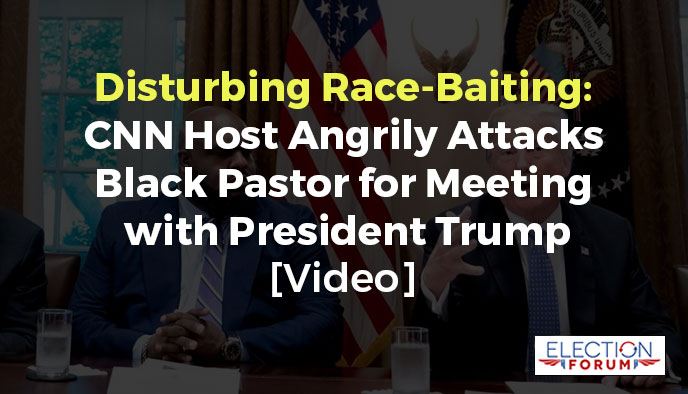 Because Pastor Owens – a black pastor – met with President Trump in the White House … and didn’t attack the president and call him a racist.

President Trump met with over 20 black pastors to discuss key ways to help the black community.

It was a two-hour follow-up brainstorming session from a similar meeting last year.

According to Pastor Harry Jackson, “So it sounded like [it would be for] evangelicals who support Trump with one important exception. And that is that in black communities, there’s a lot of backlash against the president and a lot of name-callings. But in that room, they were saying, ‘Hey, if our people got a chance to hear your hearts as we heard, they wouldn’t think the way some of them think.”

Pastor Bill Owens, founder of the Coalition of African American Pastors, was invited after the meeting to go on Don Lemon’s CNN show.

Pastor Owens held his own. He stood firm in his support of President Trump … and did not cave in to Lemon’s constant race-baiting and badgering to try to get him to accuse the president of racism.

The interview was yet another example of how the Trump-hating mainstream media is going all-out to portray the president as:

In reality, it’s the biased media that is fomenting division and hate by creating and promoting a false narrative of the president’s thoughts and motives.

Watch the drama here (about 4 ½ minutes).