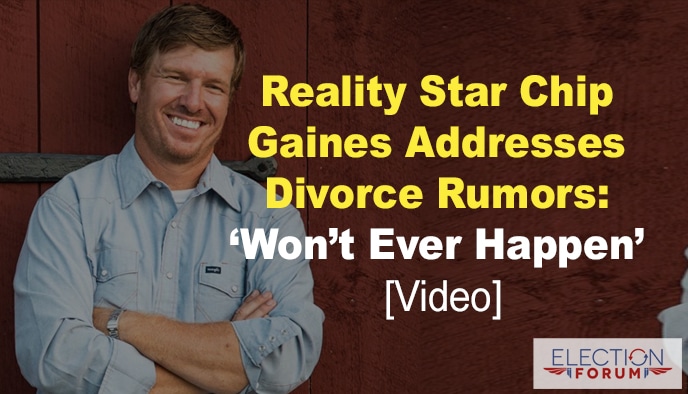 Rumors, as they tend to do, go into overdrive when it comes to reality TV stars Chip and Joanna Gaines.

Is the famous couple behind HGTV’s “Fixer Upper” getting divorced?

Evidently, the answer is NO.

Chip Tweeted: Won’t ever happen … you can take that to the bank!

He also referred to Joanna as the “love of my life.”

According to the website I always recommend readers go to double check on the facts — Truthorfiction.com — there is no divorce pending.

Earlier this year, Chip and Joanna became embroiled in controversy when it was reported the pastor of the church which they attend “teaches that homosexuality is a sin.”

Incidentally, they came under attack by the progressive media.

Meanwhile, some fans of the show are upset the Gaines are releasing its “Hearth and Hand” brand through Target, a chain often criticized for it’s liberal policies.

One person Tweeted: “Very disappointed that as Christians you choose Target for your brand. Many Christians no longer shop there and my family still will not,” another tweeted.

Target’s policy that “welcomes transgender team members and guests to use the restroom or fitting room facility that corresponds with their gender identity” has some people  upset.

The couple defends its decision, noting that a portion of the proceeds from sales will be earmarked for the Magnolia Foundation, a charity that helps families in need.

Watch this informative 5-minute video on the couple

What do you think? craig@electionforum.org