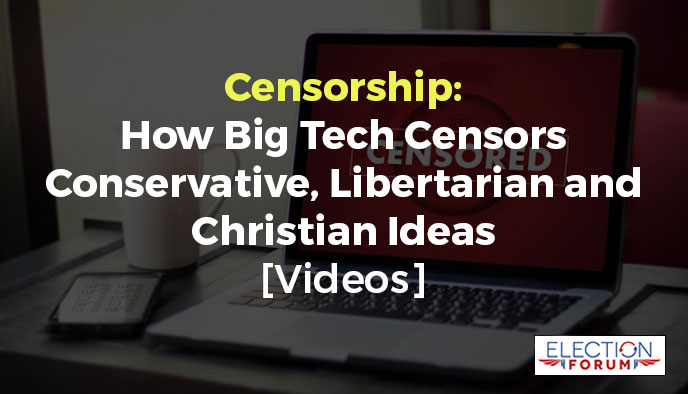 The media agrees with these Big Tech companies, claiming there’s no censoring of any kind taking place.

In reality, both Big Tech and the biased media are censoring speech they don’t like.

In the case of Google, this is nothing new. We’ve written about its blatant censorship here and here.

Google has blocked this and my other newsletters from expanding their readership.

This is deeply concerning.

Instead of being a platform for all ideas – as it claims to be – Google is now becoming the arbiter of truth, preventing millions of Americans from seeing content that presents an alternative point of view.

This is pure bias, and a big step toward eliminating the freedom of speech online.

YouTube/Google currently restricts over 56 PragerU videos, labeling them as “dangerous” or “derogatory” content.

This obviously reduces responses to PragerU ads on the Facebook platform.

PragerU has filed a lawsuit against Google for placing 56 of its videos on a “restricted” list which prevents them from being viewed by schools, churches and in homes in which parents desire to filter out pornographic and violent YouTube content.

The outcome of this case is critical. It will determine the future of freedom of speech online.

How is the progressive and socialist media contributing to the stifling free speech?

It is promoting group-think. It is giving only one side to every news report … as if only one version of news exists. It is:

Watch this video that explains how today’s progressive and socialist media has abandoned the concept of a free press (5 ¾ minutes).

Watch this video explaining how Big Tech censorship is attempting an Orwellian group-think society in which the only acceptable speech is what is deemed politically correct by those who control social media (about 5 ½ minutes). Click here.

Here is the Project Veritas video featuring an interview with a Google insider – whose voice has been altered and his face hidden to protect his identity (33 minutes).

Here is a 4-minute video of Google’s vice president of global government affairs and public policy trying to explain why PragerU’s video on the Ten Commandments is on the restricted access list.