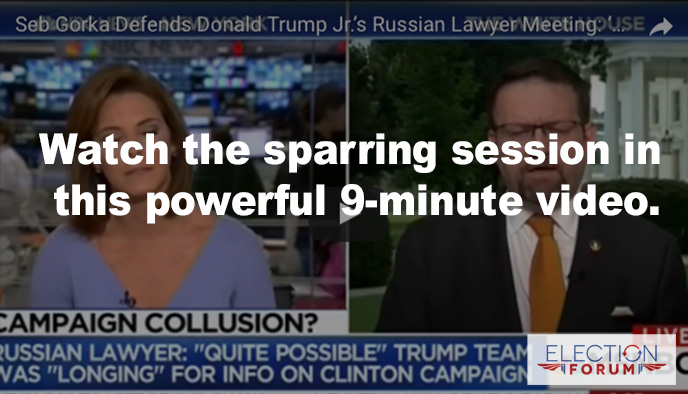 In this age of fake news, the media is overwhelmingly hostile to anyone associated with conservative values, free enterprise … President Trump.

NBC, MSNBC, CNN, CBS and ABC are non-stop in distorting the news.

So, I was glad to see Sebastian Gorka, the deputy assistant to the President, go on MSNBC to be interviewed by Stephanie Ruhle on Mosul and Syria.

But, it was classic TV ambush journalism.

Instead of Mosul, she wanted to talk Russia collusion.

She opened the interview asking him about Donald Trump Jr.’s meeting with a Russian lawyer.

And she wouldn’t let up.

Watch the sparring session in this powerful 9-minute video.

The media’s fixation on all things Russia and Trump is all politics. No evidence of collusion has been found in the last year, and yet they just don’t give up.

Gorka was polite, but Ruhle would not let up. She just had to know why Trump Jr. was meeting with a Russian lawyer, who, it turns out, wanted to talk about restoring adoptions of Russian orphans to the U.S.

She got Trump Jr. to agree to meet by promising dirt on Hillary,  which was just a pretense.

In response, Trump Jr. released his emails with the lawyer to the media. See them here.

It’s standard political practice for candidates to glean opposition information about each other, as Gorka pointed out.

But Ruhle wouldn’t let up.

Finally, Gorka read her the riot act by turning her same questioning on “digging up information on Hillary” toward the Democrats.

“The Hillary campaign collects dirt on Bernie Sanders, is that unusual,” he asks?

Finally he says, “You want to talk about Mosul or you want a nothing burger story?”

“What about the 126 felonious (administration and spy agency) leaks?” he asks her. “That’s seven times more than the Obama administration … there’s a story for you.”

But that’s not the story the liberal media wants to dig into. Not when fake news on Trump-Russia is ratings gold.

Her answer to Gorka’s questions was to constantly interrupt her guest.

Watch this feisty 9-minute video on Gorka taking on CNN.

This is what news celebrities do until they hear what they want to hear.

Over at CNN, Chris Cuomo couldn’t wait to jump on Trump counselor Kellyanne Conway over, what else, Trump and Russia.

Watch this enlightening 35-minute video on their back-and-forth.

Listen closely next time you come upon one of these hostile interviews with a Trump staffer. The news personality will keep haranguing the subject until they hear what they want to hear.

Tucker Carlson puts the Conway-Cuomo battle in perspective in this 3-minute video.

Sebastian Gorka called out MSNBC for what it is: Fake news.

Kellyanne Conway called out CNN for what it is: Fake news.

A media fixated on promoting a political agenda via fake news.

One Comment on “Biased News: Sparks Fly on ‘Russia’ [Videos]”