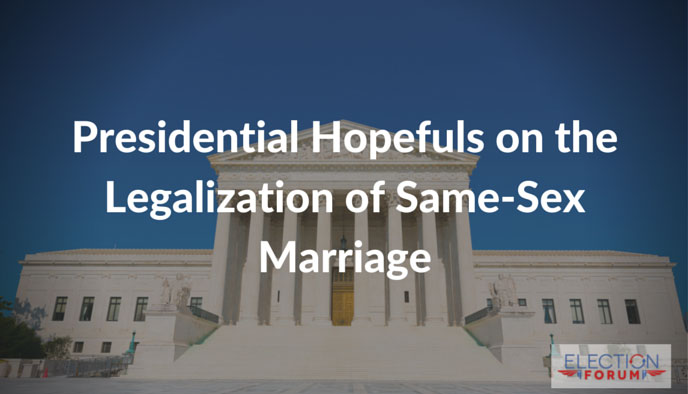 The Supreme Court has issued a ruling in favor of same-sex marriage.

And the Democrat presidential candidates all issued statements celebrating this ruling.

Hillary Clinton: “This ruling is an affirmation of the commitment of couples across the country who love one another… It reflects the will of the vast and growing multitude of Americans who believe that LGBT couples deserve to be recognized under the law and treated equally in the eyes of society.”

Bernie Sanders: “For far too long our justice system has marginalized the gay community and I am very glad the Court has finally caught up to the American people.”

Martin O’Malley: “I’m grateful to the people of MD for leading the way on this important issue of human dignity and equality under the law.”

The Republican candidates for 2016 have all expressed disappointment or disagreement with the decision, as well as a commitment to protecting the religious liberty of Americans.

However, they differ in some key ways.

We have divided the Republican candidates into three camps, reflecting three different positions on what we should now do and what they will do as a result of this ruling.

Here are their statements.

Camp 1: We disagree with the Court’s decision but will respect it as the law of the land.

“I am a proud defender of traditional marriage and believe the people of each state should have the right to determine their marriage laws. However, the Supreme Court has ruled that state bans on gay marriage are unconstitutional, and I will respect the Court’s decision. Furthermore, given the quickly changing tide of public opinion on this issue, I do not believe that an attempt to amend the U.S. Constitution could possible gain the support of three-fourths of the states or a supermajority in the U.S. Congress. Rather than pursuing a divisive effort that would be doomed to fail, I am committing myself to ensuring the protection of religious liberties of all Americans.”

“While I strongly disagree with the Supreme Court’s decision, their ruling is now the law of the land. I call on Congress to make sure deeply held religious views are respected and protected.”

“We live in a democracy and, regardless of our disagreements, we have to respect the rule of law.”

“Guided by my faith, I believe the Supreme Court should have allowed the states to make this decision. I also believe that we should love our neighbor and respect others, including those making lifetime commitments. In a country as diverse as ours, good people who have opposing views should be able to live side by side. It is now crucial that as a country we protect religious freedom and the right of conscience and also not discriminate.”

“I don’t agree with the way it was done, but it’s been done, and those of us who take an oath have a responsibility to abide by that oath.”

“I’ve said all along that when the Court makes a decision, we abide by the law of the land. And they made their determination and – just move on. It doesn’t mean I’m not disappointed, but the decision has been made.”

Camp 2: This decision is judicial activism and lacks authority: We must elect a president who will appoint judges that adhere to the Constitution.

“This decision short-circuits the political process that has been underway on the state level for years. While I disagree with this decision, we live in a republic and must abide by the law. As we look ahead, it must be a priority of the next president to nominate judges and justices committed to applying the Constitution as written and originally understood.”

“I am disappointed the Supreme Court today chose to change the centuries old definition of marriage as between one man and one woman. I’m a firm believer in traditional marriage, and I also believe the 10th Amendment leaves it to each state to decide this issue. I fundamentally disagree with the Court rewriting the law and assaulting the 10th Amendment.”

“This is only the latest example of an activist Court ignoring its constitutional duty to say what the law is and not what the law should be. Justice Alito spoke for so many of us when he said that ‘today’s decision usurps the constitutional right of the people to decide whether to keep or alter the traditional understanding of marriage… All Americans, whatever their thinking on that issue, should worry about what the majority’s claim of power portends.’”

Camp 3: The Court’s decision lacks constitutional and moral authority, and we will not accept it as the law of the land.

“[This decision] is the most egregious rejection of traditional values and the Bill of Rights since Roe v. Wade.”

“Now is the people’s opportunity to respond because the future of the institution of marriage is too important to not have a public debate. The Court is one of three co-equal branches of government and, just as they have in cases from Dred Scott to Plessy, the Court has an imperfect track record. The stakes are too high and the issue too important to simply cede the will of the people to five unaccountable justices.”

However, Santorum is not on record as supporting a constitutional amendment to protect either marriage or states’ rights to uphold it.

“I will not acquiesce to an imperial court any more than our Founders acquiesced to an imperial British monarch. We must resist and reject judicial tyranny, not retreat.”

“Let me be clear: When the Supreme Court abuses the limits of its power and attempts to create a right that doesn’t exist in the Constitution, it is the duty of the President to reject this threat to our religious liberty as the ‘law of the land.’ As president, I will never bow down to the gods of judicial supremacy.”

Huckabee is not on record as supporting a constitutional amendment, but is leaning towards it.

“The Supreme Court decision today conveniently and not surprisingly follows public opinion polls, and tramples on states’ rights that were once protected by the 10th Amendment of the Constitution. Marriage between a man and a woman was established by God, and no earthly court can alter that.”

Walker calls for an amendment:

“As a result of this decision, the only alternative left for the American people is to support an amendment to the U.S. Constitution to reaffirm the ability of the states to continue to define marriage… I call on the president and all governors to join me in reassuring millions of Americans that the government will not force them to participate in activities that violate their deeply held religious beliefs.”

Cruz has already introduced an amendment:

“I’ve introduced a constitutional amendment that would protect the authority of state legislatures to define marriage as the union of one man and one woman. We should pass that Amendment. I’ve also introduced legislation stripping the federal courts of jurisdiction over legal assaults on marriage. The Constitution explicitly gives Congress the power to strip jurisdiction as a check on a lawless judiciary; we should use that.”

Hear more from Ted Cruz in this audio: https://soundcloud.com/buzzfeedandrew/cruz-on-hannity.

Camp 4: We should reconsider and potentially eliminate governmental recognition of marriage.

“Since government has been involved in marriage, they have done what they always do – taxed it, regulated it, and now redefined it. It is hard to argue that government’s involvement in marriage has made it better, a fact also not surprising to those who believe government does little right…. Perhaps it is time to be more careful of what we ask government to do, and where we allow it to become part of our lives.”

The Washington Post wrote that this decision is a “life preserver” for Republican presidential candidates:

“The simple political reality is that the fight over gay marriage has long been over,” and “what this ruling does then is take same-sex marriage off the table as a major talking point, debate issue or differentiator between the candidates during the coming Republican primary.”

Liberals want the debate over marriage to be taken off the table.

They want conservatives and Christians to simply accept the Court’s decision as settling the issue – just like they thought would happen with Roe v. Wade.

But they were wrong then. The pro-life movement exploded in response to Roe v. Wade.

And they are wrong now. We will not stop fighting to protect and preserve the sanctity of one-man-one-woman marriage.

What are your thoughts? Email me at craig@electionforum.org.

And don’t forget to vote in our Christian Voter Presidential Poll, here.