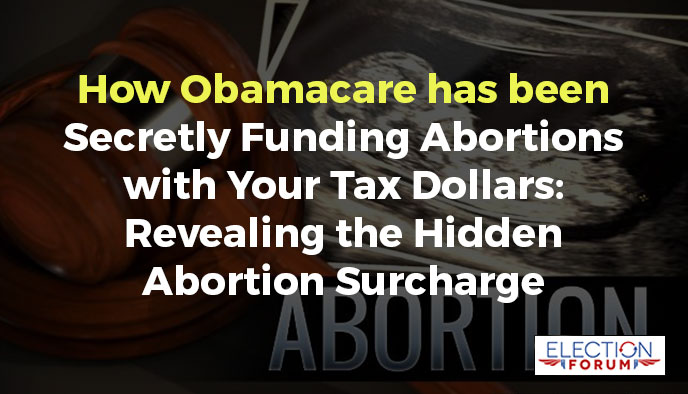 It’s been devious and dishonest…

And it’s been so convoluted and complicated that few people have understood it.

But President Trump has pulled the curtain back and revealed the hidden truth.

Since 1994, the Hyde Amendment – originally passed in 1976 but relaxed in 1994 – has prohibited the use of taxpayer funds to pay for abortion except in the following 3 situations:

1. The pregnancy is the result of rape

2. The pregnancy is the result of incest

3. The pregnancy threatens to take the life of the mother

To be fair, President Obama also issued Executive Order 13535, which stated that federal funding – including premium subsidies and cost-sharing subsidies – could not be used to pay for abortions unless the mother’s life was in danger or the pregnancy was the result of rape or incest.

But complying with this executive order has been next to impossible…

The ACA only requires that companies offering plans covering abortion “collect from each enrollee in the plan (without regard to the enrollee’s age, sex, or family status) a separate payment” for abortion services.

The “separate payment” must be listed as a separate line item on the enrollee’s monthly insurance invoice. But when the enrollee qualifies for a federal subsidy or tax credit, the amount of the subsidy or credit is based on the entire monthly premium – including the amount collected for abortion services.

It’s been an effective “end run” around the taxpayer-funding of abortion restrictions imposed by the Hyde Amendment.

The Centers for Medicare and Medicaid Services has issued a new rule requiring insurance companies that offer plans covering abortion on either the state-based exchanges or the federal exchange to issue two separate monthly bills to enrollees – one for abortion coverage and one for their other healthcare coverage.

This will prevent premium subsidies and tax credits from funding abortion.

Incidentally, all of the Democrat candidates for president want to abolish the Hyde Amendment and allow federal funding of ALL abortions.

5 Comments on “How Obamacare has been Secretly Funding Abortions with Your Tax Dollars: Revealing the Hidden Abortion Surcharge”