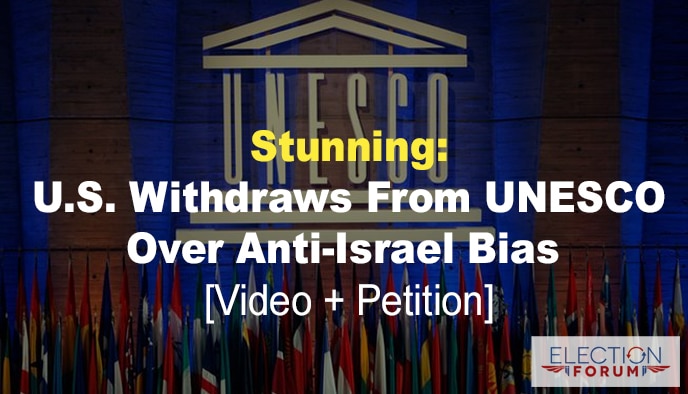 It’s politically incorrect … but the right thing to do.

Both the U.S. and Israel announced they are pulling out of UNESCO, the United Nations’ Educational, Scientific and Cultural Organization, over anti-Israel bias.

For over 30 years, I’ve seen UNESCO abuse its funds and mission to support liberal causes, dictators and corrupt regimes.

It wouldn’t be the first time the U.S. has left UNESCO. Ronald Reagan pulled America out in 1984, but President Bush sadly brought it back in 2002.

The U.N. doesn’t try to hide its anti-Israel feelings through the many pro-Palestinian resolutions it files.

UNESCO simply follows U.N. policy, and the Trump simply had enough when this summer it declared Hebron, a historical city in the Israeli-occupied West Bank, a Palestinian world heritage site in danger.

The city is home to the Cave of the Patriarchs, a burial place that Christians, Jews, and Muslims consider holy.

In its declaration, UNESCO sharply criticized Israel’s behavior in the West Bank, accusing the Jewish state of “illegal measures against the freedom of worship and Muslims’ access to their holy site, Al Aqsa Mosque.”

You mean “illegal” as in trying to protect worshippers?

You may recall, Israel stepped up security measures at the mosque in June after three Palestinians attacked police officers with guns and knives, killing one Israeli policewoman and wounding several Muslim bystanders.

She said U.S. taxpayers should no longer be on the hook to pay for policies that are hostile to our values and make a mockery of justice and common sense.

Worsening the situation, the terrorist Hamas party has just signed a unity deal to rejoin the Palestinian Authority government. That means a U.N. agency has recognized a terrorist-led “state.”

The U.S. is right to leave UNESCO and stand with Israel, not against it, on the world stage.

Witness what God’s Word tells us about Israel in Genesis 12:3:

“I will bless those who bless you, and him who dishonors you I will curse, and in you all the families of the earth shall be blessed.”

And a warning in Zechariah 2:8 to any nation that is an enemy of the Jewish state:

“For thus said the Lord of hosts, after his glory sent me to the nations who plundered you, for he who touches you touches the apple of his eye.”
Now, the next step should be to completely defund the U.N., keeping it from receiving U.S. taxpayer money.

Please sign our petition to defund the U.N. by CLICKING HERE.

One Comment on “Stunning: U.S. Withdraws From UNESCO Over Anti-Israel Bias [Video + Petition]”