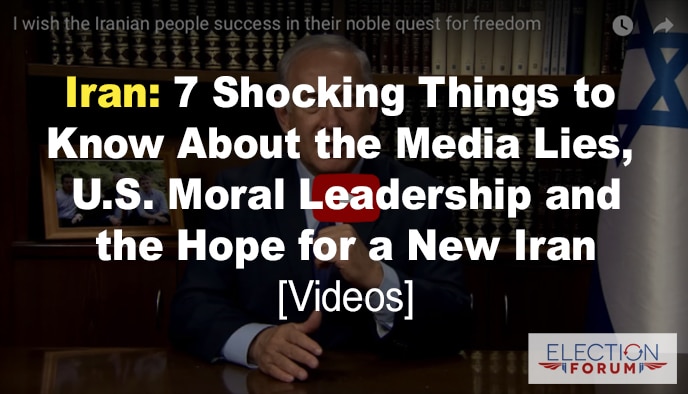 The Iranian people have had enough…

Things were supposed to get better after the U.S. lifted economic sanctions and sent $1.7 billion to the Iranian government as part of the 2015 “nuclear deal.”

But unemployment is still 40% for young Iranians in the 15 to 29 age group … and the freedom of speech enjoyed by their Western counterparts is still wishful thinking in Iran.

The government – basically a socialist-run dictatorship – recently raised egg and poultry prices by 40%.

What started out as a protest in small towns over poor economic conditions has now grown into a much larger and more widespread movement in virtually every city … calling for regime change.

“The people of Iran are crying out for freedom,” said Nikki Haley, U.S. Ambassador to the U.N. “This is the precise picture of a long-oppressed people rising up against their dictators.”

Here are 7 important things you need to know to understand what’s going on in Iran and why:

Christianity is considered a Western influence and therefore a threat to the Islamic identity of the country.

Converts to Christianity from Islam comprise the largest group of Christians and suffer the most persecution.

A Persian person who decides to leave Islam can be sentenced to death if male … life in prison if female.

Before the Islamic Revolution in 1979, Iran was pro-Western. Most of the country’s 80 million citizens have no memory or knowledge of those days.

The regime under President Hassan Rouhani and Supreme Leader Ali Khamenei is brutal and oppressive, enforcing a medieval Islamic code of social mores … while highly educated and technically savvy young Iranians admire and want to adopt Western culture in music, TV, dress and treatment of women.

Billions of dollars in economic aid is used by the government to support terrorism rather than to improve the economy and the lives of average Iranians.

Since the Islamic Revolution of 1979, America has been called the “Great Satan” by the leaders of Iran and by radical Muslims.

Israel is referred to as the “Little Satan.”

The Obama administration deliberately ignored the anti-regime Green Movement protests in 2009. Currying favor with Tehran to negotiate a nuclear weapons agreement was more important than speaking out against human rights violations.

President Trump, Vice President Pence and Ambassador Haley are providing moral support and leadership by praising and encouraging the protestors … and by criticizing the oppression and violence of the Iranian government.

The progressive left creates fear as it advocates appeasement … and the deep state bureaucrats do all they can to undermine Trump’s policies.

She believes he needs to “be quiet” about the protesters and the regime in Iran.

The New York Times and Newsweek both scolded Trump over his statements about the Iranian government blocking social media sites.

“Trump bars Americans on Twitter but tells Iran to unblock social media sites,” chimed Newsweek … as if the comparison is even remotely relevant.

The Reagan Doctrine was the foreign policy philosophy that freedom is a universal God-given right of all people … and that it should be the mission of the United States to “nourish and defend freedom and democracy.”

Who would have thought the Berlin Wall would come down or the Soviet Union collapse?

Who would have thought atheistic Romania and other Eastern Bloc countries would break free from the Soviet orbit?

And Nikki Haley has said, “We must not be silent. The people are crying out for freedom. All freedom loving people must stand with their cause. The international community made the mistake of failing to do that in 2009. We must not make that mistake again… The international community has a role to play on this. The freedoms enshrined in the United Nations charter are under attack in Iran.”

Watch the first 3 ½ minutes of Nikki Haley’s news conference below. She quotes some of the freedom-loving slogans that are being chanted by the protestors:

Watch a 1 ½ minute video of Israeli Prime Minister Benjamin Netanyahu responding to accusations that Israel is behind the protests in Iran:

Here are 4 ways to be in prayer: