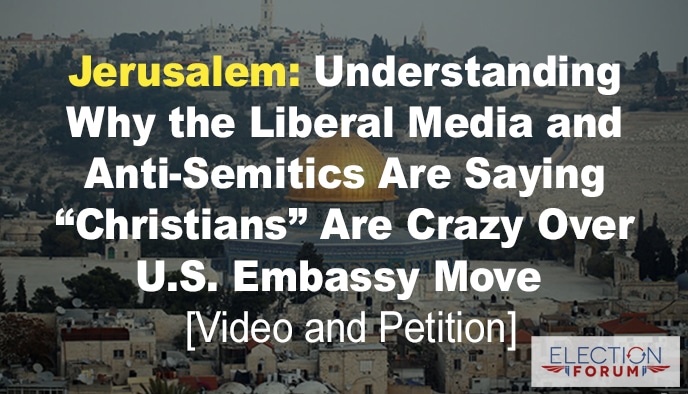 Christians are being called “crazy” for supporting moving the U.S. embassy in Israel from Tel Aviv to Jerusalem.

For example, MSNBC commentator Chris Mathews lashed out at Christian evangelicals and their “crazy ideas about Israel which is (sic), I don’t know, mythical,” blaming them for President Trump’s decision to recognize Jerusalem as the capital of Israel.

Other commentators mocked belief in the “rapture” and Christian interest in Israel and Bible prophecy.

“They don’t understand the situation over there, how tricky it is, ethnically and tribally,” Matthews added. “They don’t care because it’s a religious belief. Trump is playing into that…”

Here are some of the indisputable facts:

Actually, it’s Chris Matthews and other liberal news commentators who “don’t understand the situation over there.” Here are some of the indisputable facts:

Why is the 37-acre parcel of land in East Jerusalem known as the Temple Mount so important to Jews, Christians, and Muslims?

Here are 3 reasons why President Trump’s announcement recognizing Jerusalem as the capital of Israel will produce more stability in the Middle East, not less:

Ever since Israel recaptured East Jerusalem – also known as the Old City – during the 6-day war in 1967, many Bible scholars have focused on the prophecies regarding the city of Jerusalem. This past June marked the 50th anniversary of Israeli control of the entire city.

Every 50 years in Jewish history marks an important milestone: a Year of Jubilee.

Here are just a few of the many Biblical prophecies regarding Jerusalem during the end times leading up to the Second Coming of Christ:

Christians have been excited about Bible prophecy ever since Jerusalem was recaptured by Israel in the 6-day war of 1967 because that event could be an indication that “the times of the Gentiles” are nearing completion. The events immediately preceding the Second Coming of Jesus follow the fulfillment of the times of the Gentiles in Luke 21.

Watch this short 1-minute video of the leader of Hamas calling for violent resistance to President Trump’s recognition of Jerusalem as the capital of Israel:

Also, if you haven’t already done so, sign the petition below in support of making Jerusalem the capital of Israel:

One Comment on “Jerusalem: Understanding Why the Liberal Media and Anti-Semitics Are Saying “Christians” Are Crazy Over U.S. Embassy Move (video and petition)”