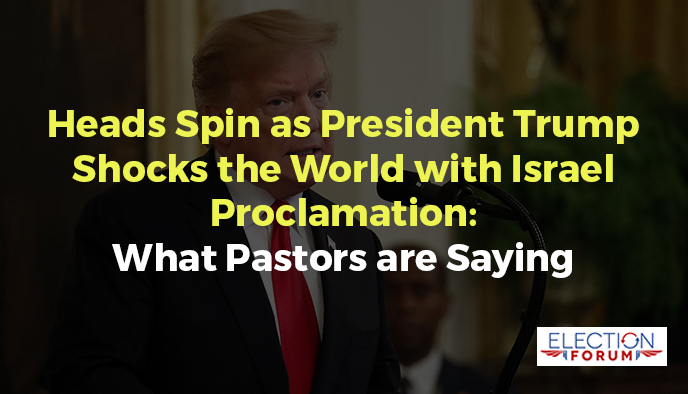 This time because he signed a declaration supporting the official recognition of Israel’s sovereignty over the Golan Heights.

Socialist Democrats said, “Don’t do it.”

Iran and the militant Palestinians said, “Don’t do it!”

The last time I visited the Golan Heights, it was peaceful … until some rockets were fired into the area of Iran-supported militants.

The Golan Heights is central to Israel’s survival.

The Golan Heights is economically growing under Israel’s rule.

The Golan Heights is critical to Israel’s peace and sovereignty as a nation.

Despite the opposition, Trump’s bold move was applauded by Israel … by Christians … and by those who love freedom.

It wasn’t long ago that the world was shocked by Trump recognizing Jerusalem as the capital of Israel … and ordering the U.S. embassy to be moved there from Tel Aviv.

Here is what some evangelical leaders said about President Trump’s recognition of the Golan Heights as part of Israel’s sovereign territory:

Greg Laurie of the Harvest Crusade said the recognition is “critically important to Israel’s long-term health, stability, and the prosperity of Israel and her people.”

“The Golan Heights is part of land that God gave to Abraham and his descendants and has been controlled by Israel since 1967 following the Six-Day war … It was once used to stage attacks against Israel by those hostile to her very existence, and terror groups largely funded by Iran would do so again if given the opportunity.”

“Amazing and unprecedented – Another promise kept … After 52 years, the U.S. officially recognizes Israel’s sovereignty over the Golan Heights, thereby creating a safer and more secure Israel. As we bless Israel, the Lord blesses our nation! Grateful for a president willing to take a bold stand on behalf of our greatest ally.”

“I applaud this administration’s decision to recognize what’s been true since God gave the Israelites the Promised Land, and more recently when Israel re-took control of the land during the Six-Day War in 1967, that the Golan Heights are the rightful, sovereign lands of Israel.”

2 Comments on “Heads Spin as President Trump Shocks the World with Israel Proclamation: What Pastors are Saying”