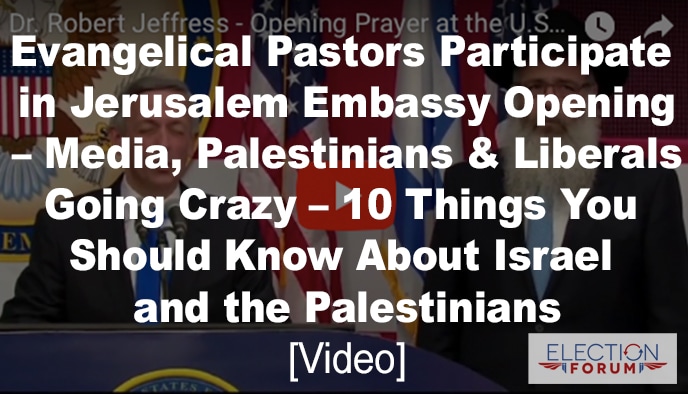 When I met with Donald Trump in New York – along with many major evangelical leaders – he made a promise.

His promise: the U.S. Embassy in Israel would be moved to where it should have been from the beginning – to Israel’s capital, Jerusalem.

Despite intense opposition and criticism, the right thing has happened.

Here are 10 things you need to know about the historic day … and about the explosive Israeli-Palestinian conflict:

President Trump is the first sitting U.S. president to:

The pastor of the First Baptist Church of Dallas – Robert Jeffress – gave the invocation.

Pastor John Hagee of Cornerstone Church in San Antonio gave the benediction at the end of the ceremony.

You can listen to Robert Jeffress’ prayer here:

It was on May 14, 1948 that future Israeli Prime Minister David Ben-Gurion read the Israeli Declaration of Independence.

In 1948, Israel’s founders urged the Arabs living in Palestine to remain in the new Jewish state…

Instead, Egypt, Syria, Iraq, Lebanon, Jordan and Saudi Arabia declared war of Israel … and 650,000 to 750,000 Arabs living in Israeli territory fled to Jordan and Syria.

In 1967, Arab states again attacked Israel with the intention of destroying the Jewish state.

Things didn’t quite go as planned for the Arabs…

In 6 days the Israeli army defeated the Arab aggressors completely.

He said, “We’ve not come to conquer the holy place of others but to live with others in harmony.”

And Hamas leader Yahya Sinwar – speaking of the planned activities along the Gaza border with Israel – declared:

“We will take down the border and tear out their hearts from their bodies.”

These are the people the progressive politicians and media support and defend.

The 3 parties most responsible for inciting Palestinian violence against Israelis are:

Two of the most prolific lies:

After Israel took control of east Jerusalem in the 1967 6-day war, General Moshe Dayan met with Muslim religious leaders and turned the Temple Mount over to the Waqf – a Jordanian-based authority.

Muslims are free to worship on the Temple Mount … Israeli Jews may not pray there.

The Palestinians use children as shields for their rocket launch sites.

They also send young men and women to blow themselves up in Jewish markets and on Jewish buses.

The Israelis don’t do such things…

They criticize Israel for building Jewish settlements in West Bank communities … calling their actions “a hindrance to the peace process.”

To the Israelis, the notion that the Palestinians should be forcibly excluded from Israel’s pre-1967 borders is unthinkable…

On the other hand, the progressive media and politicians –and of course the Palestinians – would expect Jews to be expelled from any future Palestinian state.

Either they don’t see their hypocrisy … or they see it and don’t care.

Instead of reporting on the embassy opening ceremony itself, the liberal media attacked the embassy move – focusing on Palestinian protests … and predicting that the Israeli-Palestinian peace process would be set back…

Some media talking heads even mused that the U.S. would lose it’s standing as the primary broker of peace between the Israelis and the Palestinians.

3 Comments on “Evangelical Pastors Participate in Jerusalem Embassy Opening – Media, Palestinians and Liberals Going Crazy – 10 Things You Should Know About Israel and the Palestinians [Video]”