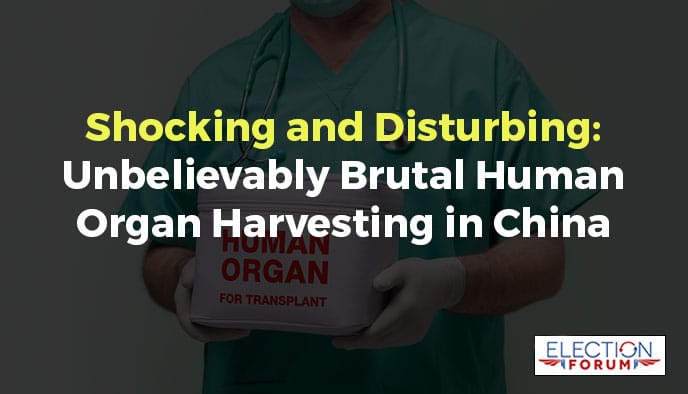 Human organ harvesting and transplanting is big business in China – a $10 billion to $20 billion annual windfall. And the way China is conducting its trade in human organs is gruesome beyond imagination. Many prisoners of conscience – Falun Gong members, Uighur Muslims, Tibetan Buddhists and underground Christians – have been subjected to medical testing …  and have had their organs forcibly removed without anesthesia. The charges are difficult to prove because the bodies of the victims are disposed of in secret. The only witnesses to the atrocities are the doctors, police and prison guards involved. But evidence is leaking out of China… Zheng Qiaozhi – let’s call him George – still has nightmares… He was an intern at Shenyang Army General Hospital when he was drafted to be part of an organ harvesting team. He tells of a young prisoner who was brought in – very much alive – and tied hand and foot. The army doctor in charge sliced him open from his chest to his belly button and exposed his two kidneys. “Cut the veins and arteries,” he told the shocked intern. George did as he was told. When he was asked to take out the prisoner’s eyeballs, George couldn’t do it. With blood spurting everywhere, the dying teenager gave George a terrifying look he says he’ll never forget… He was so haunted by his experience that he soon quit his job at the hospital, fled to Canada and assumed a new identity. Now, thanks to his bravery … and the bravery of others who are speaking out … China’s monstrous practice of harvesting organs from living prisoners is being exposed. In a report that’s bringing some of the torture to light, it is estimated that between 60,000 and 100,000 organs are transplanted every year in China. Multiply this number times the cost of a liver transplant ($170,000) or a kidney transplant ($130,000) and you can see why organ harvesting is a $10 billion to $20 billion annual business. Ten hospitals have admitted to using the Falun Gong as a source for human organs – which means living “donors” who are prisoners of conscience. There are as many as 2 million such dissidents currently being held in Chinese prison camps because of their religious or political beliefs. As gruesome and as unbelievable as the practice of cutting open living humans and removing their organs sounds, it is not much different than killing babies in the womb or during birth – or even after birth – and then selling their organs and limbs to the highest bidder. When a society takes away fundamental freedoms from its citizens – freedom of unhindered speech, freedom of religion and religious expression, protection of the unborn – it’s only a small step to devaluing the lives of those who disagree with what the government considers to be politically correct and religiously acceptable. Sacrificing political and religious dissidents as living organ donors must stop. And the U.S. can and must play a pivotal role in making sure it does stop. With both President Trump and Vice President Pence negotiating with China to hammer out a new trade deal, they must insist that religious tolerance – including the ending of organ harvesting from religious prisoners – be a condition of any deal. Please pray: You can learn more about the disturbing practice of organ harvesting here. What do you think? Email me at craig@electionharvesting.org Here are the rest of this week’s articles: