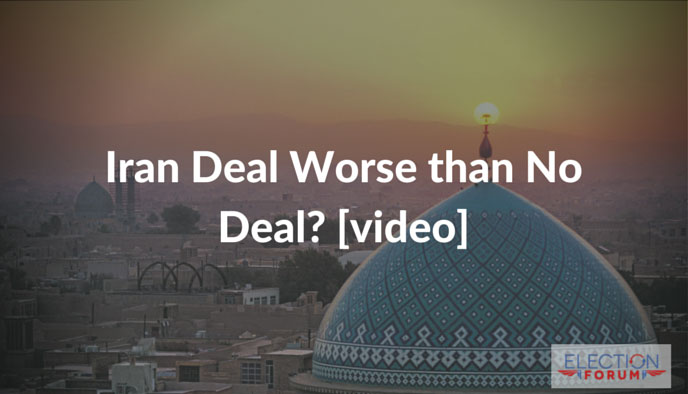 Most of the 2016 Presidential candidates have condemned the nuclear agreement with Iran. A few have issued serious concerns…

Read our full article about the deal, here.

The most relied upon argument of the deal’s supporters is that no one has proposed an alternative. Here is a video of Rubio’s alternative to the deal.

Here are some snapshots of what the 2016 candidates are saying about the deal:

“Without anywhere anytime surprise inspections, a full accounting of Iran’s past secret nuclear arms pursuits, elimination of Iran’s uranium stockpiles and the lifting of any sanctions only upon verification of Iranian compliance, this is not a good deal, but a recipe for disaster and the first fateful step toward a frenzied nuclear arms race in the Middle East.”

The deal is “the most dangerous, irresponsible step I have ever seen in the history of watching the Mideast.”

The agreement is a “dangerous, deeply flawed, and short sighted deal” and still allows a path for Iran to get a nuclear bomb.

“A comprehensive agreement should require Iran to verifiably abandon – not simply delay – its pursuit of a nuclear weapons capability… This isn’t diplomacy – it is appeasement.”

The Iran deal is “unacceptable.” Will vote against it because “sanctions relief precedes evidence of compliance… Iran is left with significant nuclear capacity… [and] it lifts the ban on selling advanced weapons to Iran.”

“I do believe that negotiation is better than war… I am somewhat skeptical of the President’s agreement. However, I am in favor of negotiations over war, and I think I’ve been one of the reasonable people in our party who has not been beating the drums for war.”

The Iran deal “will be remembered as one of America’s worst diplomatic failures.”

“Instead of making the world safer, this deal will likely lead to a nuclear arms race in the world’s most dangerous region. What’s worse, the deal rewards the world’s leading state sponsor of terrorism with a massive financial windfall, which Iran will use to further threaten our interests and key allies, especially Israel.”

“One of the reasons [Israeli Prime Minister Benjamin] Netanyahu came to the U.S., spoke to Congress and thereby the American people, was to tell us we can do better than this… And, frankly, to do better means that we make it clear that nuclear options are not viable for Iran. Not now, not tomorrow, not ever.”

“Shame on the Obama administration for agreeing to a deal that empowers an evil Iranian regime to carry out its threat to ‘wipe Israel off the map.’”

“We know that China and Russia have not been negotiating on our side of the table, because it has been in China and Russia’s interests to open Iran’s economy. So there is a lot of reason to be suspicious here. It would be different if Iran was a good actor and had negotiated in good faith all this time, but they haven’t. And we’ve caved.”

“Iran joins the sad list of countries where America’s red lines have been crossed… The president is playing a dangerous game with our national security, and the deal as structured will lead to a nuclear Iran and, then, a nuclearized Middle East. The deal threatens Israel, it threatens the United States, and it turns 70 years of nuclear policy on its head.”

“The Iranians came to the negotiating table, if you will, at a very weakened state, and they are going to leave with hundreds of billions of dollars, the ability to project terror – which they are the chief sponsor of terror. We’ve legitimized them. We’ve given them legitimacy in the international community, something that they deeply wanted here, and they’ve done basically nothing in exchange for that.”

“A bad deal is worse than no deal and I hope this Congress will let – and I hope that other folks thinking of running for president will let the Iranians know: they are negotiating with a lame duck president – any deal they sign with this president will not be binding with the next administration.”

“President Obama’s decision to sign a nuclear deal with Iran is one of the most destructive foreign policy decisions in my lifetime… For decades to come, the world will have to deal with the repercussions of this agreement, which will actually make it easier for Iran to develop a nuclear weapon.”

If elected, “I will order a review of Iran’s compliance with the deal, and an evaluation of Iran’s continued sponsorship of terror over the timeframe of the agreement. I will move to ensure that the arms embargo – and specifically, the ballistic missile embargo – remain in place until Iran verifiably demonstrates that it desires to act as a stabilizing force in the region.”

“[The Iran deal] is a fundamental betrayal of the security of the United States and of our closest allies, first and foremost Israel.”

“Today, the international community led by the United States has agreed to not only legitimize and perpetuate the Iranian nuclear program, but also to further arm and enrich the brutal theocratic regime that has oppressed the Iranian people for more than thirty years – a regime that is wrongfully holding United States citizens captive, that is sponsoring radical Islamic terrorism across the globe, and that regularly promotes the destruction of both Israel and America throughout its streets.”

The deal “undermines our national security,” and Obama negotiated “from a position of weakness.”

“We have now made a third-rate autocracy equivalent to a world power, a threshold nuclear power. A country that can now, in about less than 5 years, begin to receive arms imports once again. And one of the leading sponsors of terrorism in the world will now have billions of dollars available to them to use for things like the sponsorship of terrorism.“

“This deal violates promises the president made to the American people on multiple fronts. It is not an anytime, anywhere inspection process.”

It is “unacceptable” that this agreement is reached “while innocent Americans languish in the most brutal conditions of Iranian jail cells…. I am profoundly disappointed that the agreement with Iran did not ensure the unconditional release of American citizens: Jason Rezaian, Paster Saeed Abedini and Amir Hekmati, as well as any progress in obtaining information about the fate of my constituent former FBI agent Robert Levinson.”

“The Iranian regime and the world should know that this deal is your deal with Iran – yours meaning this administration – and the next president is under no legal or moral obligation to live up to it.”